Joelle Aaron views music as a passion, but as a major, it ultimately was not for her.

Webster University freshman, Joelle Aaron, relied on music as an outlet for everyday life. This therapeutic outlook changed when she came to Webster to major in music. Aaron said the textbook-based classes took the fun out of music.

“I almost dreaded the thought of music because of those classes,” Aaron said.

Before Webster, eight-year-old Aaron auditioned for the community theater at the Saint Charles Community College. In sixth grade, Aaron got involved with choir where she joined jazz choir in 10th grade. After having moved from South Carolina, Aaron delved into music as she adapted to the new environment.
Transitioning into college, Aaron continued her music pursuit. She figured majoring in something familiar would suit her.
“I saw Webster had a vocal jazz performance major, so I was like ‘I know how to do this—that’s my major.’ It was almost like a default major,” Aaron said.

The courses Aaron enrolled in ultimately made music a stressor for her rather than a reliever. Overwhelmed by work, Aaron started to dread music rather than look forward to it.

“I haven’t even done as much writing my own stuff since I’ve been here,” Aaron said.

Smith emphasized the difference between loving music and viewing it as a job. In Aaron’s jazz-related courses, she said professors followed strict jazz standards that did not encourage students’ creativity.

“I don’t necessarily see myself when I’m 30 getting a chart of music and just having to learn it,” Aaron said.

Instead, she said she wanted to pursue her own music without having to major in songwriting. She also wanted to expand her knowledge about different topics. In high school, she worked on the newspaper and learned photography.

“I didn’t want to stop at music. I knew I was good at other things… I thought I should venture out the rest of my options,” Aaron said.

Because of this, Aaron switched her major to media communications. Smith explained that this major includes production elements that allow students to be more creative within the analysis portion of the grade. It would allow Aaron to incorporate music into her education without pursuing a degree in music. This major also offers a variety of careers to pursue—including photography, reporting, or web design.

“You have a little bit of experience in everything,” Smith said, “I think it’s a great place to start.”

As a freshman, Aaron would not face any difficulties switching, either. Students in Aaron’s new major will need 128 credit hours to graduate, with roughly 30 hours of GCPs and 50 hours of electives. Aaron can use all the credit hours she earned this past fall as electives. However, Smith noted that if Aaron had transferred as a junior, things would be more complicated.

Audio Production major Gabriel Vianello is a friend of Aaron. While he has not majored in music, he still believes his major gives him greater creative liberty than if he had majored in music.

“If I can produce music, I can kind of like control how I want all the sound instead of being like a little cog in a wheel,” Vianello said.
Together, Aaron and Vianello have started a band. They are both guitarists and have hung up fliers encouraging others to join. With Vianello, Aaron hopes to compose music listeners can relate to. She also hopes to learn more about the production process through working with Vianello, and not only produce her own music, but perform. 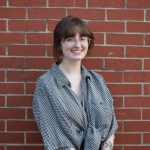 Cas Waigand (she/her) is the editor-in-chief for the Journal. She is a major in journalism with minor in photography. Cas has covered COVID-19 and the 2020 general election, and enjoys writing, watching Netflix, crocheting and taking photos.