Following a conference championship in 2014, the Webster University men’s soccer team looks to repeat the accomplishment after losing 15 seniors.

Webster was still selected to finished tied for second, according to the SLIAC coaches’ poll.

“You would expect somebody with that kind of loss, losing all those starters and guys that played; you would expect us to be picked a little lower than that to be quite honest,”  said Mike Siener, Webster University Men’s head soccer Coach.

Siener believes that the high ranking can be attributed to respect of the soccer program and what they have done the last few years.

Even with the influx of talent, Siener believes that there won’t be a problem with leadership on the team. Webster looks toward senior midfielder Ramon Perez and senior defenseman Daniel Tovar to be leaders of a young team.

“They are going to be playing a lot for us. Both of those guys will be key players. They are both good leaders and work really hard. Those two will set the tone and everyone else will follow suit,” Siener said.

Junior forward Brendan Shields is the leading goal scorer for returning for the Gorloks. Shields had four goals in the 2014 season and a total of 11 points.

Chemistry is an area Siener believes will improve as the year goes on.

“We’ll build on our chemistry, which will take some time with a lot of new freshmen and some of the returners. It’s a process.” Siener said. “We are going to get better each day.”

Chemistry among the coaching staff will also have to grow as the season goes on.

Sellmeyer was a defenseman, two-time captain and 2012 SLIAC player of the year for the Gorloks before graduating in 2013.

“He’s already been a big asset.” Siener said, “He gives a unique perspective with me not having played in a long time. He brings a lot of energy to the program. It’s going to make us better.”

Sellmeyer comes back hoping to lead the team to a Championship victory, something he was unable to accomplish during his four years at Webster.

“I want to help this team reach the goal of winning a national championship one day. We have a good group of guys this year and the goal is to win a National Championship,” Sellmeyer said. 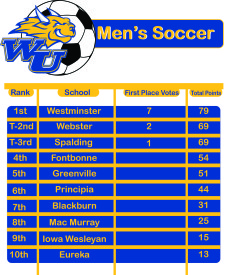