Coach of the Year: Chris Bunch

On March 7, Webster Univerity lost by one point to the eventual No. 3 team in the nation, Illinois Wesleyan University in the Division III National Championship tournament.

It was after that losss, Head Coach Chris Bunch said, that other teams have started to take Webster University basketball seriously.

Before the 2013-2014 season began, Bunch, who was named Coach of the Year by  D3hoops.com, said teams in the conference pegged the Gorloks as a fourth-place team. Despite opposing predictions, Bunch felt he and his players were due for a good year.

“(Opposing teams) didn’t know (who) we had. I’m not sure (who) we had, but no one knew (who) we had,” Bunch said about his team before the season started. “We had a lot of new guys, and I felt like we were going to surprise some people.”

This past season, Webster won the St. Louis Intercollegiate Athletic Conference title and earned a trip to the Division III National Tournament. Sophomore Center Kevin Miller said Bunch did a lot of work with his players to figure out how to build the best starting five every night.

“Bunch assembled quite the unusual team for this season. He took Hunter Ward, Aaron Griffin and myself, all of whom are of unconventional age for college basketball, and made us all successful this season,” Miller said in an email.  “We are all older guys and he knew how to build rotations around us to get us enough rest but also to have us on the floor for key minutes.” 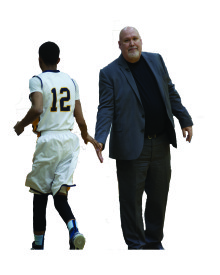 Bunch said due to injuries, he had to integrate three freshmen, Adam Etter, C.J. Moore and Jonathan Odjo, into the team’s rotation early. But with healing players returning to the roster, Bunch worried how they would work with his current roster and still put together wins.

In addition to the team, Bunch also helped Miller rebuild his comeback into Webster basketball.

“There would have been a lot of coaches who would have laughed in my face and told me no if I asked to come back and play college basketball after weighing 420 pounds, but Bunch didn’t,” Miller said. “He questioned it at first, but he believed in what I was doing and ultimately guided me into having such a successful season this year.”

Heading into the summer of the off-season, Bunch said he sent the message to his players to take advantage of the time off and work on their individual game.

“The Illinois Wesleyan game gave them a little taste of what they can do. Hopefully they will build on that and not take that for granted next year,” Bunch said.