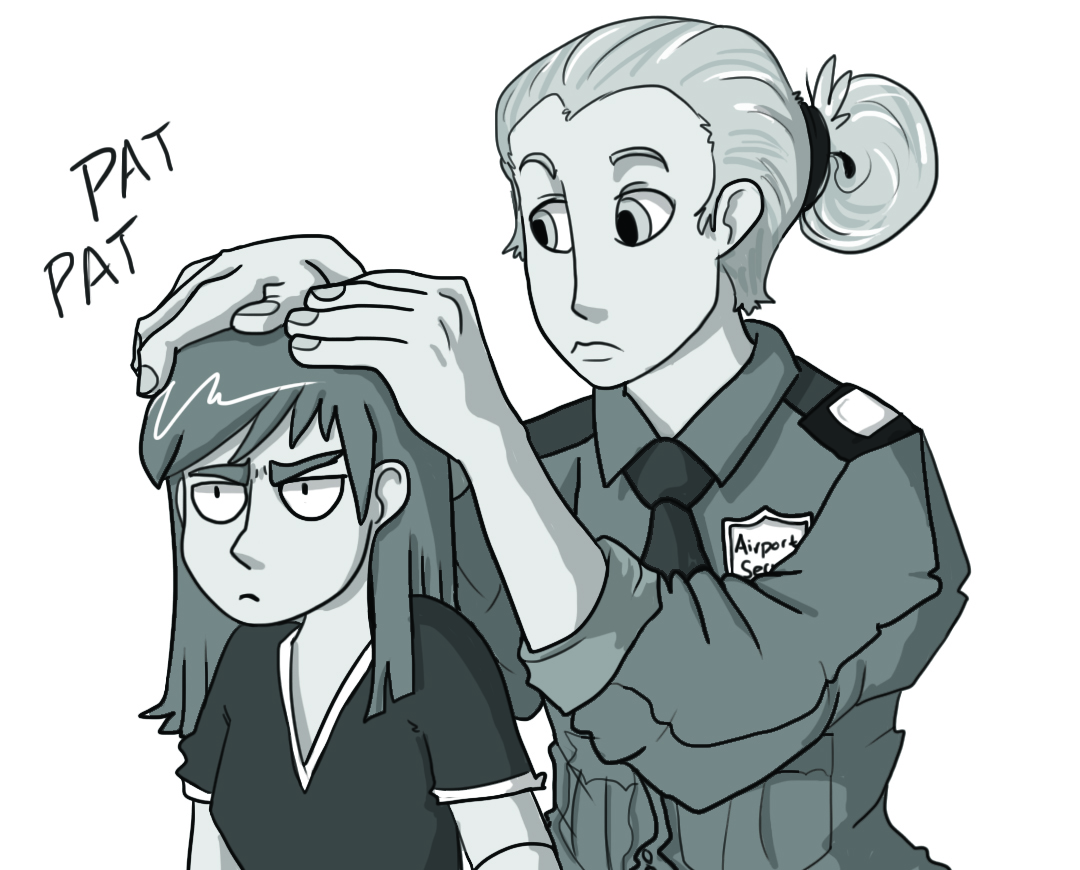 I asked my mom why she always flies Delta, and she said, “Because they serve Diet Coke.” Clearly, the woman has her priorities, and you really cannot blame her. There is simply nothing else to look forward to on an airplane. Ever since that horrific September Tuesday thirteen years ago, airports have gone from a fun stop on vacation to a terrorist hotspot where anyone could be dangerous.

The Transportation Security Administration (TSA) goes to extreme lengths to ensure a safe flight. All of the fuss over three-ounce liquids and oversized bags is made in the name of safety. However, when the TSA woman asked to pat my hair down (and no one else’s) at the St. Louis airport, it was the final straw. She may not have found a bomb, but she sure did unleash some explosive thoughts on my end.

My diabetic mother’s insulin pump almost kept her from getting on the plane in Detroit. An embarrassing ten minutes for her finally ended when the TSA discovered that the fifty-year-old was not a threat. It seems the TSA is trained to know how to detect a bomb – but not a medical device.

Once everyone comes out of security and hurriedly puts on their belts, shoes, jackets and hair accessories, it’s like watching them run out of a bad one night stand. Time is of the essence when flying. Ironically, security takes all the time they need, time that you don’t have.

Each liquid container, bag and article of clothing that must be checked is for a purpose. Terrorists have tried crazy things to do harm to others and the TSA will simply not allow anything to get by them.

A House Subcommittee on Transportation Security said the TSA operations were costly and “poorly executed.” Each regulation is made with a purpose, most based off of previous experiences. The New York Times said the rule to take off your shoes was made after a man put explosives in his. The three-ounce liquid container rule was made after a similar situation occurred. The report said, “Once a procedure is put in place, it is almost never removed.”

Essentially, this makes everyone in the airport a potential threat. This rigorous analytical process that we all must go through is justified by safety and concern – which I appreciate. But with all the wasteful time consumption, is it even worth it?

I will say that the excitement of the airport is still there. It is incredible to see the different nationalities and hear their stories in the few seconds it takes for them to walk by you. But the anger, tension, anxiety and restlessness still reverberate through the terminals regardless of where you are from.

According to an article in the Los Angeles Times, an airport in London has done away with checking liquids altogether. They use a new type of scanner that can detect explosives in liquids.

The article said that the TSA is “looking into several technologies for liquids screening.” Certain liquid restrictions are still in place, but maybe this is a step in the right direction.

Until this fateful day, airport woes are still to be faced. Flights are delayed, missed and rerouted. Your connecting flight is always in gate M15 when you landed in gate A31. The tiny pretzels are all that give me peace, but Delta thinks I only need about twelve of them to satisfy me after an exhausting race through the terminal.

I used to wonder why there were bars in airports, but now I totally understand. My advice for you is to drink up. You are in for quite the experience. As for me, I’ll take my ‘97 Chevy over a Boeing any day.