The show ran from Feb. 25 to March 6 at the Sargent Conservatory of Theatre Arts.

The atmosphere is formed the moment you walk onto the 17th century-esque set: lavish paintings (a closer look will reveal them as pictures of cast members), posh props, ornate patterns and a soothing piano melody that floats through the space.

This is the scene of Webster’s Sargent Conservatory of Theatre Arts’ production of the comedic satire, “The Learned Ladies.” The show will run from Feb. 25 to Mar. 6 in the Emerson Studio Theatre.

The story of “The Learned Ladies” takes place in the 1600s and follows the lives of Henriette (Amara Webb) and Clitandre (Matthew Cox) in their pursuit to marry. Henriette’s mother and sisters, “the learned ladies,” provide frequent comedic opposition to the couple’s goals.

Junior acting majors Jailyn Genyse and Samy Cordero attended the 2 p.m. showing on Feb. 26. The intricacy of the set and costumes stood out to both students.

“Walking into the theater immediately put you into the world and the time period,” Cordero said.

Beyond the set, they enjoyed seeing their classmates on stage.

“To see them step into different roles… The fact that they’re doing the role justice is great,” Genyse Said.

Cast members prepared for the performance for a month. Several rehearsals, however, were interrupted by snow days.

Despite this, junior acting major Matthew Cox, who plays Clitandre, says he felt prepared. He attributes this to the relationships within the cast and crew.

“We were all really comfortable with each other, and it was just a really good, fun place to work in,” Cox said.

But snow days weren’t the only challenges to production.

As a newcomer to Webster, adjunct professor Rebekah Scallet served as the production’s director. Regardless, she saw this new experience as an opportunity.

“It’s always a challenge anytime you are working with new people, but that’s also what makes it fun,” Scallet said.

Another production challenge occurred before rehearsals even began, according to Scallet. The challenge came in choosing the approach for how the play should look and feel.

“Finding ways to make sure the play was accessible and understandable by a contemporary audience was one of my primary goals,” Scallet said.

And if the standing ovation after the show on Feb. 26 is any indication, audiences are connecting with it.

Ultimately, Scallet says she had fun making the show and that “it was wonderful to watch others share in the joy.”

Admission to “The Learned Ladies” is free for Webster students. Tickets can be reserved ahead of time through the Sargent Conservatory of Theatre Arts. 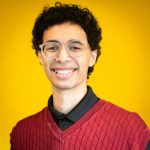