Julie Smith, a professor at Webster University’s School of Communications, will bring her dog Millie to class. She also incorporates games and scavenger hunts into the classroom.

Dogs, cookies, scavenger hunts and Kahoot games. These are just some of the ways Webster University instructor Julie Smith works to make her class unique compared to other professors.

“I was getting bored hearing my own voice. And if I was bored, I figured they must be bored, too. Plus, I think students appreciate somebody trying new things in the classroom,” Smith said.

One thing that Smith does is bring her dog, Millie, into class.

“It’s the best day ever. When Millie comes in, it brightens my day,” Webster freshman Lilie Floyd said.

Floyd isn’t the only student who enjoys it when Millie comes in. Liz Gerger is a current grad student at Webster University. She had Smith for Media Communications during her time as an undergrad.

“The only thing better than a class with Julie Smith is a class with Millie Smith. Millie is such a fun guest and classmate,” Gerger said.

“I love that dog. She is a really silly, smelly, funny-looking dog, but it makes me so happy. She really brings serotonin for everybody,” Benton said.

The purpose of serotonin is to stabilize mood, according to the Hormone Health Network. A 2019 study by Washington State University showed that petting a dog or a cat reduces Cortisol, the hormone which causes stress.

However, Smith’s reason behind bringing Millie into the class isn’t just because it is fun.

“I knew it would make the kids happy,” Smith said.

Another thing Smith does to try and make her classes unique is incorporate scavenger hunts or Kahoot review games.

“It’s like we do these team challenges. [They are] really fun and interactive, and everyone is always participating, which I really like,” Webster freshman Cassie Gray said.

“Definitely the challenges along with the discussions. So it’s a good mix of learning and yet we’re having fun while we’re learning so we’re retaining the information better,” Floyd said.

All three of these Media Foundations students said that they would take another class taught by Smith.

Benton said that they are disappointed because their schedule won’t allow them to be in Smith’s class next semester.

While she is now commended for her teaching, Smith said she didn’t initially intend to become a professor.

Smith said there is one main thing she hopes to teach her students.

Coming from a background of running a media center, Smith didn’t grow up wanting to teach. However, since 2001, Smith left the media center at the high school in St. Louis and has been at Webster University ever since, building relationships with students and faculty.

“Julie is a bright ray of sunshine anywhere she goes. Whether she’s teaching, speaking or handing out macaroons in the hallway, she can always lift a mood or make someone smile,” Gerger said. 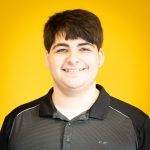