Filmmaker Damon Davis relived the year after the fatal shooting of Michael Brown in his documentary, “Whose Streets?”

Brown’s death prompted protests, live videos on social media and tension within the St. Louis community. The reality of the aftermath was portrayed in this film that hit home for Webster University students.

Robert Richardson, a Webster University student and resident of Florissant, was at the forefront of the events that took place following the shooting. He said police involved shootings get frustrating, but the film was a good reminder to stay active in social justice.

“You feel the stress of constantly talking and constantly fighting, at times you need that reminder,” said Richardson. “[It is] a moment of nostalgia. Somebody asked me why I was so upset and why I cried when it first happened, and it’s like you watch your entire childhood crumble before your eyes.”

The day of the shooting still resonated with Kayla Shepperd, who is also a Webster University student and Florissant resident. Shepperd believed it was frustrating how the media changed the portrayal of the event to fit their agenda.

“The media calls [African-Americans] looters and rioters, but then after the Superbowl, they had all them white people rioting and looting,” Shepperd said. “They call that a celebration. Same thing that people in Ferguson was doing, that’s just something that I don’t understand.”

Coordinator of the Multicultural Center and friend of Davis, Larry Morris put together the event and said it was only right to bring Davis to Webster.

Davis was active in most of the aftermath of Brown’s death, gathering 400 hours of footage to put together the documentary. Davis said he would not be continuing the “Whose Streets?” project but wanted to commemorate the people who put their lives on the line and show what it was like to be a part of the protests.

“My main goal was to show black people dignified in a beautiful way,” said Davis. “To show the dignity in being angry. It’s okay. We don’t have to make excuses to make white people feel okay about it.” 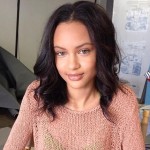