First of all, thank you for taking the time to read this. As you probably already know, what I am about to talk about is going to be very sensitive and a very tough subject to talk about. I am a 20-year-old African-American student here, currently in my junior year pursuing my bachelor’s in film production. It is my hope to inspire, empower and entertain through the medium of film very soon. 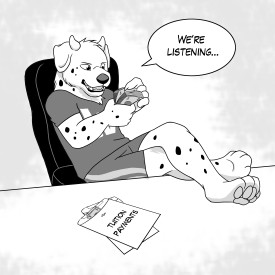 With all that is happening at other universities around the nation regarding justice, racism, privilege and protests such as the Million Student March, one cannot help but wonder where Webster University stands on issues like these. Events such as the one that recently happened at Mizzou, which is only two hours driving distance away, should cause us to look at the condition of our school as an institution and the condition of our students.

Now, we are one of the more liberal schools in the Midwest, however, attaching the word “liberal” that speaks to the culture and atmosphere here means nothing really. When the word “liberal” is attached to a school such as this, all it means is that Webster attempts to help foster an open-minded atmosphere. But with all that has come to light in recent events, being open-minded is not enough.

Flip on any news station and you will see the current state of my generation. Specifically with college students, on a national scale we owe roughly $1.3 trillion in student loans. U.S. News reports that the average college student will graduate with nearly $30,000 in debt. Mind you, this is all while on the search for a nice paying job our degree is supposed to benefit us with.

So the question we must tackle is: What can Webster do moving forward to help make the best college experience possible? We are not talking about more dances or more free food (although more free food would be awesome) or more new buildings that need to be constructed.

We are talking about whether or not yourself and the administration are even listening to the voices and concerns of the student body. It is to my understanding that you do meet with key leaders of some organizations, but most of these meetings are either created last minute, which does not give the students proper prep time, or the meetings are delayed multiple times, which speaks to the overall seriousness of the meetings. I have heard these allegations on a consistent basis from some of the major organizations here on our main campus.

According to a December 2011 article from our school newspaper, The Journal, your nearly-million dollar-home is paid for through the school and an April 2015 article reported that in 2013 you received $500,174 in total compensation, including a $75,000 bonus. Together, you and Provost Julian Schuster in 2013 received more than $850,000 in combined total compensation.

I am not throwing that out there to make you feel bad or to personally attack you, but hopefully you come to understand that while we are paying to attend here and contributing to those numbers, the least you can do is listen to what we have to say. Do not just hear us, because there is a difference between hearing someone and listening to someone. Listening will not only have one take notice of what someone has to say, but ultimately act on what one has said.

I believe Webster has the potential to be the global community we always advertise about. I just saw an advertisement of Webster’s chess team on a billboard downtown on the highway, and on it in bold yellow reads, “A Global Community.” Our marketing team places a huge emphasis on creating a global community.

Well, let us start building a better community right here on our main campus. Let us start being transparent about what is actually going on. Let us start having the tough discussions about white privilege, racism, discrimination and how we can make the student body aware of the realities that many of our peers are having to struggle with on a daily basis.

Healthy dialogue, I believe, will begin to break down barriers that will hinder any progress or growth that is needed for Webster to be all that it can be for the students. All we need is for someone to listen.

Thanks for your time.