For Nadya Ortiz, a chess scholarship opened a door she would never have believed possible — earning a college degree in the United States. Describing herself as the child of a “very humble family in Colombia,” the financial support allowed Ortiz to attend the University of Texas at Brownsville (UTB) for free and earn an undergraduate degree in computer science. Beyond UTB, Ortiz secured internships at a Swiss university to study computational neuroscience and at Apple Inc. as a software engineering intern. In May, Ortiz will graduate with a master’s in computer science from Purdue University, where she worked as a teaching assistant.

Ortiz attributes these successes and many more to college chess. At UTB, Ortiz said she learned English and made friends for a lifetime. With support from the university, Ortiz said was able to become a Woman Grandmaster in chess, the first Colombian to do so. 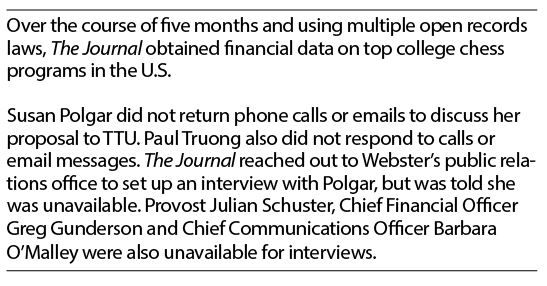 “Every time I played the Chess Pan-American tournament, I tried to give my best at every game since I wanted UTB to be part of the Final Four,” Ortiz said. “In addition, we used to have chess clinics which were given to the community. It was a great opportunity for me to share my chess knowledge and experiences with the Brownsville community.”

Several members of the Webster University chess team either declined to be interviewed or did not respond to email and Facebook messages asking for interviews. However, Ortiz’s sentiment seems to be shared by at least one member of Webster’s chess program. Israeli Grandmaster Anatoly Bykhovsky told the defunct news website The Daily in June 2012 that without a chess scholarship, he would have been unable to study in the United States.

Paul Truong, Susan Polgar’s husband and marketing director of The Susan Polgar Institute for Chess Excellence (SPICE), told media at the time that the program’s departure from Texas Tech University (TTU) was necessitated because of the institution’s inability to provide better scholarship funding. Truong said SPICE had only been able to offer large scholarships after a $320,000 donation in 2007, which was to be distributed over five years. That donation was soon to run out, and so the couple searched for other options.

“It’s one of those very unfortunate situations,” Polgar told the TTU campus newspaper after her move to Webster was announced in February 2012. “If we like the status quo, if we are okay with, say, 20 players on the team or in the program, or let’s say having a few grandmasters, it’s okay. But we get to the point where we are the No. 1 program in America — and probably in the world — and everyone wants to come here. Something has to give.”

To view the various documents and financial data obtained by The Journal for this investigation, click here.

“We are going to give scholarships to the kids, but all of those kids have phenomenal GPAs and brilliant scholastic achievements,” Schuster said in 2012. “So they would qualify if they had independently decided to come to Webster. They would all qualify for a substantial — the top — package that we offer. There is a marginal cost of bringing them in, because we are giving them a little bit more than if they only had scholastic achievement.”

In a letter to the editor sent to The Journal in April 2013, Truong said the collective GPA of the Webster chess team was 3.6.

Webster’s top academic scholarship is the Presidential Scholarship. The award covers a student’s tuition for four years. To renew the award each year, a student must meet full-time status and maintain a GPA of 3.5.

In that same Journal letter to the editor, Truong said several universities have larger scholarship budgets than Webster, and named the University of Texas at Dallas (UTD) specifically. Truong said despite its larger funding for scholarships, UTD hadn’t achieved the success Webster had. In 2011-12, UTD’s total scholarship expense amounted to $200,119.

University of Maryland at Baltimore County (UMBC) Chess Director Alan Sherman said chess scholarships have attracted students to UMBC that might not have otherwise considered the institution. These students use their chess scholarships to earn a degree for a future job.

“Many of our finest chess player-scholars realize that their future lay in education and a professional career, not as a chess competitor. And so they leverage their accomplishment and talent in chess in their future,” Sherman said.

As recently as March 17, a post on Polgar’s Chess Daily News website encouraged prospective chess players to apply for full and partial chess scholarships to Webster University. On SPICE’s website, chess scholarship applications for undergraduate and graduate students are available. The award of a “Chess Excellence scholarship may include partial or full tuition, fees, room, and/or board.”

•Six full chess scholarships, which would cover fees, room and board and chess-related expenses

•Six to eight partial chess scholarships, which would cover tuition and fees

TTU declined Polgar’s offer, instead presenting a counter offer of a $100,000 increase in scholarship funding. Polgar presented another offer to TTU and made reference to a bid from a competing institution. Polgar told TTU administrators in an email correspondence obtained by The Journal that the competing institution had pledged at least $220,000 in annual scholarship support to SPICE. If TTU wished to maintain its relationship with SPICE, Polgar told TTU administrators their next bid  would need to come within 10 to 15 percent of the competing institution’s. In the end, TTU declined Polgar’s offer.  The university declined comment on the TTU proposal, saying it would be unfair to speculate on the proposal because Webster is not named in the materials.

In a segment on the NPR program All Things Considered in April 2012, Polgar said Webster had committed scholarships to transferring players that were comparable to their packages at Tech. In Polgar’s last year at TTU, 19 students received chess scholarships, totaling more than $126,000. Four individuals received the following chess scholarship packages, respectively:

•A package covering all out-of-state tuition costs, and 65 percent room-and board costs ($8,283)

•A package covering all out-of-state tuition costs, and 83 percent of room-and-board costs

•A package covering all out-of-state tuition costs, and all room-and-board costs

UMBC was the first school to build an elite chess team with scholarship aid. A six-time winner of college chess’s top prize, UMBC used its chess prowess to help bolster the university’s intellectual reputation. Witnessing the return on chess investment UMBC had generated, other schools moved to underwrite a chess program. The first was UTD, followed by the UTB. With the hiring of Susan Polgar in 2007, TTU entered the fray. And when Polgar moved to St. Louis, Webster became the newest elite chess program in the country.

In 2012-13, the UTD, UMBC, TTU, and UTB chess programs provided a total of more than $550,000 in scholarships to their respective players. TTU secured funding for chess scholarships and returned to college chess’s top match a year after Polgar departed. A four-year, $280,000 pledge from a private donor will allow the team to continue to offer scholarships. TTU’s campus newspaper also reported in April 2012 that TTU would allocate $50,000 in annual scholarship funding as well.