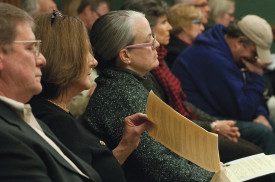 Webster Groves resident Peggy McAuliffe compared Webster University’s expansion to an “infestation.”  She said she has watched the university buy up neighborhoods in the past few decades.

“Webster University has infested residential neighborhoods; and I use that word not to offend, but by its meaning defined by: to inhabit or overrun, in numbers large enough to be harmful or threatening,” McAullife said. “I keep wondering: when is the growing going to end?”

The Webster Groves City Plan Commission voted Monday to keep the public hearing open and postpone the vote on an educational rezoning of the city. The plan commission’s vote will decide if the proposal makes it before the city council. The board said it would need more time to gather information and discuss possible amendments to the proposed zoning code.

Eden Vice President of Institutional Advancement Bryce Krug presented a letter written by Eden President David Greenhaw. In the letter he wrote that rezoning would be another setback in the road to Eden’s mission.

“Again, Eden Seminary is looking at a rezoning that punishes us, harms our institutions, takes our property and places irrational restrictions on us,” Krug read. “Eden Seminary will take every means available to it to stop a rezoning that hurts us and damages our ability to accomplish our mission. None of this is what Eden wants.”

In September 2012, Greenhaw said he created Eden’s 2012 master plan to keep students on the campus. He said Eden’s future vision was to sustain the institution after a drop in enrollment over the past few years.

“You’re going to put a dagger in the stomach of Eden, and I don’t think they will be able to make it under these circumstances,” Reed said

Eden would be placed in a district that includes educational facilities with less than and limited to 500 students. The district also allows “limited” student housing, which could include housing for families of students.

Webster University purchased three properties from Eden in 2010. The city denied a conditional use permit (CUP) in August that would have allowed the university to use two of the buildings on Eden’s campus and demolish the third.

Changes to the zoning draft were presented to the Webster Groves Plan Commission on Feb. 3, and were followed by a public hearing where residents as well as university and Eden representatives voiced their opinions on the proposed zoning changes.

Gunderson urged the Plan Commission to table the proposed zoning changes so Webster University and Eden could have further conversations with the city about rezoning. He said the proposed zoning would create an “artificial boundary,” making collaborations between educational institutions and expansion impossible.

“If our desire is to use the facilities all of these institutions have efficiently, then we have to share them. And we’re hopeful the city will see the value in collaboration and shared use of facilities, rather than create artificial boundaries,” Gunderson said.

The draft presented on Feb. 3 still included the 1,250 bed restriction for EC-3 institutions.

In a letter received by the city on Dec. 23, 2013, Eden Greenhaw and Gunderson asked several questions about the proposed zoning changes. The letter questioned whether there would be rights to appeal certain zonings, how properties in a certain zone could be sold and several other amendments affecting the institutions.

Dean of University Libraries Laura Rein read a letter from Webster University President Elizabeth Stroble. If the rezoning were to be beneficial to the universities, Webster University would be in support of the proposed rezoning.
The City Plan Commission will continue the public hearing at a Feb. 25 meeting.