_Video by Deja Randle
This was MCISA’s first year participating in the National African American Read-In. The group wanted to get the word out to the many students of Webster to read books by African-American authors. The assistant director of MCISA, Niki Parres, said they where excited about the turn out of the event.

“We were a little worried that, the weather being so nice, people will choose to be outside, but we had a full house…” Parres said.

Dang-Williams, associate dean of the College of Arts & Sciences, was delighted to share a book she came very familiar with during both her undergraduate years and in graduate school. The name of the book is “The Souls of Black Folks” by W.E.B Dubois. In sharing the book with students,she shared Dubois’ views on the line and veil that separated the races.

Who Started This Chain?

Twenty-three years ago, the first National African American Read-In was created under the leadership of its living founder, Dr. Jerrie C. Scott.

The National African Read-In has more than 750,000 participants a year. The celebration of this literacy campaign is held all through the month of February. The chain invites schools, churches, libraries and communities to take part and increase the movement. 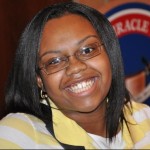