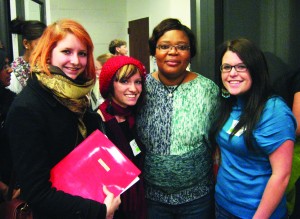 (New York, New York, March 3, 2011) Imagine a nun walking outside of a small restaurant in an isolated town in Uganda. Suddenly she is accosted by three 13-year-old boys with AK-47s; and they tell her they won’t kill her since she’s a nun but they need her money so they can buy their girlfriends blonde wigs.

“That’s how much influence we have on them from the West,” said Ashley Newport, communications director of Students for Gender Equality and a junior sociology major.

Newport, along with Lydia Schulte, a senior anthropology major and president of SGE and Jenni Taylor, junior Spanish education major and vice president of SGE, attended the UN Commission on the Status of Women in New York City. The three SGE officers, as well as two additional students, attended the seminar from Feb. 19-27. Taylor and Schulte said they were in session from 9 a.m.to 8 p.m. with only 30 minutes separating each session.

“It feels like I went through a whole year of school with the information I got,” Schulte said.

Schulte said they were advised by Theresa Eultgen, a Webster University alumna who went to the conference last year, to take journals with them during their trip.

“We have sixty to seventy pages of notes, combined we probably have hundreds,” Taylor said.

Schulte said they probably have a book’s worth of notes, which will come in handy when the SGE team shares their experience with their organization and women’s studies in the coming weeks. Schulte, Taylor and Newport shared some of their shocking stories they heard from the various panels they attended.

“Two hit me really hard,” Taylor said. “One was on Russia and they don’t have a law against domestic violence. We complain all the time that ‘Paperwork is worthless, blah blah blah,’ but because they don’t even have that women are beaten every day, some are beaten to death and there’s nothing against that.”

Taylor said what was hardest about leaving these sessions was a feeling of futility. She said the panels would talk about this entire broken system for an hour and a half and nothing was done and then they were sent off to a new session.

“That was my breakdown moment where I was like ‘What do you want me to do with this?’ ” Taylor said.
Schulte said everyone seemed to have the same convictions — they felt renewed after their visit and they didn’t want to work for government organizations.

“We also have our own problems, number one and number two … our own idea of helping is throwing money at a situation,” Schulte said. “And that’s not working so well.”

Taylor agreed, but acknowledges the importance of government officials working for change.

“You need the people who are going to work to change the one word in a document and how that can change the world of a demographic that was never reached before and yet they go to these meetings and they fight for that one word and one sentence,” Taylor said.

Taylor, Newport and Schulte all agreed coming back to Webster after their experience in New York left them feeling both overwhelmed and exhausted.

“What I learned is still really hard to process, and (going from) using that to what can I do with that,” Schulte said.
Taylor compared her experience to  coming back from a different country.

“It’s been a culture shock,” Taylor said. “I don’t know how else to explain it.”