Two SGA presidents resigned within weeks of each other.

Sarah Hill, a sophomore political science major, is the fourth president of the Student Government Association (SGA) this year.

In the spring of 2019, president Vladimir Radojkovic stepped down after disagreements with advisor.  The title then passed to his vice-president Fayeshun Brown. Brown held the office for only one SGA meeting before the association swore in John Wallis.

After Wallis’s announcement via Facebook that he would be stepping down from the position, Hill, his vice president, took up the responsibility without hesitation.

“My initial reaction was obviously sad because John is a dear friend, and I know he loved the university,” Hill said, “I was also really excited because this is a position I have always been striving for.”

Hill says she has also had an eventful year. Last year, Hill became senator-at-large, a voting member of SGA representing the general student body. Hill worked as the secretary of the SGA last spring. Students elected her to vice president at the last SGA election in April.

As president, Hill has the right to nominate a vice president to fill the vacancy. The nominee will present themselves in front of the next general body meeting to be voted in by the SGA.

Hill has already informed the SGA about her nomination for vice president, Jessica Battle. Hill says Battle has been a great leader at the university and will work well with this years team.

“I have no doubt that they are going to be able to work together and accomplish great things this year,” Hill said.

Battle was unanimously confirmed to be the next vice president at their first general body meeting on Tuesday.

Hill says she is still nervous about her new position because she refuses to be anything but the best leader she can be.

“If I wasn’t nervous that means I wouldn’t be worried about doing a good job,” Hill said. “That takes a lot of work and time but I’m eager to grow and develop the team the best way that I can.”

Wallis moved home this summer to help out his family in financial straits and to step back from campus involvement. Wallis said his mental health was suffering from taking on too much.

According to Wallis, he was enrolled at Webster online during the summer and sought to complete his education degree gradually. He said he fully intended on staying home after taking a job at Neosho Junior High School as a library assistant. 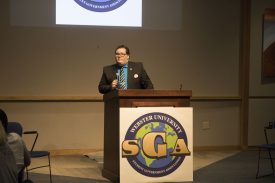 Wallis is making loose plans to return to Webster this fall but will not return to his former leadership positions. According to Wallis, he changed his mind about staying home after a conversation with his boss at Neosho Junior High School.

“I had an interview with my boss, and she said, ‘Your education comes first, and you should probably quit your job,’” Wallis said. “I wasn’t expecting that conversation.”

Wallis said that coming back to Webster was ultimately in his best interests. Wallis said that even though he will not be returning to leadership positions, he will continue to be a voice for all students on campus.

“This summer has been a rollercoaster of events,” Wallis said. “Deciding to quit webster was one of the hardest of my life, but now I’m coming back.”

Wallis and Hill ran together in Spring of 2019 for president and vice-president. Wallis advocated for to make campus more handicap accessible and fought for more financial opportunities for first-generation and low-income students.

“I want to be the best leader I can be,” Hill said. “After all, this isn’t my organization its our organization.