Recent studies conducted by a Michigan college professor have shown tattoos reduce the amount of sweat an athlete may have during their exertion period.

Those studies suggest tattoos contribute to permanent adjustments in the amount of sodium found in sweat and the in the skin’s dermal layer. Maurie Luetkemeyer, a professor of integrative physiology and health science from Alma College, and two of his students conducted the study.

Luetkemeyer said that the remaining bits of ink block sweat glands. When an artist tattoos, dyed needles hit the skin at a rate of 50 to 3,000 times per minute, which slows responses within the glands and affects the amount of sodium in nearby cells into sweat.

Tattoos have become an increased trend in athletes over the years. In 2014, the National Basketball Association found that 55 percent of its athletes had at least one tattoo.

Though those numbers decrease at the collegiate level, multiple Webster University athletes and professors found the correlation between tattoos and a loss of sweat difficult to recognize.

Former Webster men’s basketball player Michael Dunn, who used tattoos as a way to honor his late grandmother, said he never noticed a lack of sweat. When asked if the results of the study would have any effect on his desire to add future tattoos, Dunn said that it would.

“I have not actually noticed if tattoos reduce sweat,” Dunn said. “I had not heard about that until now, but that is an interesting theory. I would definitely get more tattoos, without a doubt.” 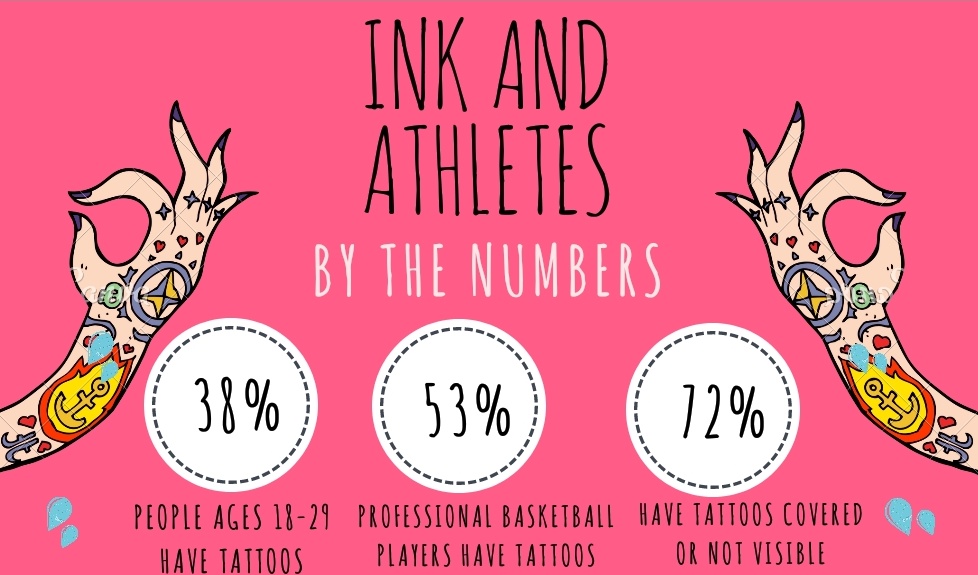 The research study started at the University of Michigan, which not only revealed some of the more unknown side effects to tattoo ink such as bacteria and carcinogens, but also that sweat would become nearly eliminated through tattoos.

The Gorloks men’s basketball team has multiple players with visible ink on their arms or shoulders. Another player, sophomore Justin Tarplin, said while his tattoos impacted his morale, he too was unsure of if they impacted his sweat production.

“My tattoos are a reminder for me to stay true to myself and to always remember where I came from,” Tarplin said. “I can’t honestly tell if there’s any difference [in sweat] from now and before I had tattoos.”

Statistics from the Pew Research Center reveal 38 percent of people from ages 18 to 29 have at least one tattoo.

Tarplin also said that he would seek to add more art to his body, citing his desire to be creative and different from others. During the study, the researchers did not specifically state if athletes needed to have fully-inked sleeves on their arms, or if the process begins with a single tattoo.

Should athletes need to be fully-sleeved to experience the effects, the amount of college student-athletes capable of sharing their thoughts would decrease.

Allison Levin, a sports analytics and society professor, said she had nine different tattoos, but had not yet experienced or seen any athletes with sweat prevention.

“My first four tattoos were spur of the moment,” Levin said. “I did not put much thought into meanings. I have not heard about [the sweat prevention] and I have not experienced it with my own tattoos.“