The process for recruiting prospective athletes has historically focused on the same aspects. Where seeking out the best possible athlete has long been considered the blueprint, the Gorloks’ men’s soccer team, and its “character over talent” approach is a differing mindset, but it has produced the same successful results.

The Gorloks enter the 2018-19 season without numerous players from the 12-win team of last season, including First Team All-Conference midfielder Dino Music (now a member of the coaching staff)  and forward Nermin Hajrizi.

The upcoming team is rich with optimism, in large part due to the arrival of nine freshmen, whom the coaching staff have praised for being strong on-field athletes, but having even more positives off the field. Assistant men’s soccer coach Josh Sellmeyer elaborated on those points when discussing how the  recruiting board is made.

“Certainly, the student-athletes we recruit have to be college-caliber soccer players first and foremost, otherwise they will not be on the recruiting board to begin with,” Sellmeyer said. “But traits like character and coachability are as important — if not more so – than soccer-playing ability to our coaching staff.”

The mindset of seeking out the athlete of superior character, as opposed to superior talent is nothing new for the coaching staff, though Sellmeyer says that the staff have focused on this more aggressively in recent years.

“We really put a premium on finding the right type of student-athletes these past two to three years in particular, and we are definitely seeing the dividends,” Sellmeyer said. “It is essential that the players we recruit are the right fit for our program.”

Factoring in their opening season victory to kickstart the 2018-19 season, the Gorloks have not lost a regular season game since September 26th of last year, marking the twelfth consecutive time they have not lost. 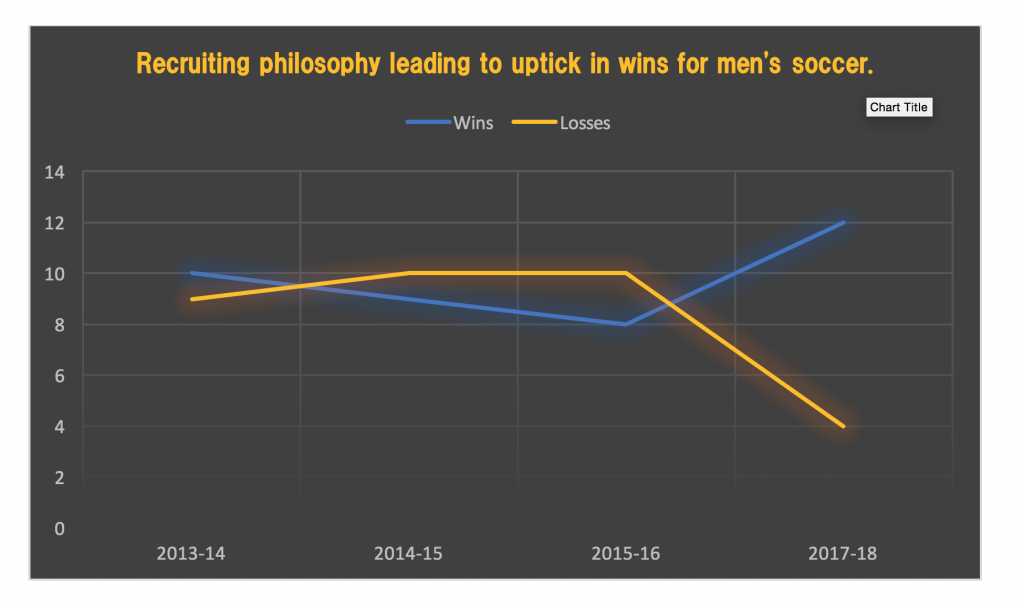 The overarching storyline of this season comes in welcoming nine new recruits, including four midfielders, two forwards, a pair of defenders, and a goalkeeper. In the annual preseason SLIAC (St. Louis Intercollegiate Athletic Conference) coaches’ poll, Webster University was tabbed as the predicted runaway favorite to win the conference. The coaching staff credits much of this to scouting and team building through the right type of personnel, which head coach Mike Siener also invests in

For Siener and the coaching staff, this unique process begins through travel in places such as Arizona and throughout the West coast, where many of their current players were recruited. After considering their on-field talent, the personality evaluation takes place.

“The first thing we do is, we’re at these showcases and games, we highlight and circle kids that we like,” Siener said. “Then we get in touch, and contact these kids through phone calls, emails, texts, and campus visits. We determine kids’ character, those types of things that we’re looking for, through all those avenues.” From there, Siener and the staff, namely Sellmeyer consider numerous questions during the process, measuring how coachable a player is, their cultural fit, and their ability to fit team identity.

From the perspective of a student-athlete, this means that during some recruiting visits, the discussion may revolve around everything but the sport. Junior midfielder Michael Baldridge says that he felt coaches were genuinely interested in him as a person, as opposed to just an athlete.

“We talked about what I was thinking about majoring in, my work ethic in class, and even things as well as what types of music I listened to or television shows that I watched,” Baldridge said. “Even now we will still have conversations about life and other things besides soccer.”

This mindset is different for Division I athletics, where the idea of acquiring the best possible athletic prospects has become the norm. During their 2017 Student-Athlete Advisory Committee survey, statistics found that some student-athletes made verbal commitments as early as their sophomore year in high school. The survey also brought out that 53 percent received a scholarship as a junior, and 64 percent of students were offered scholarships prior to becoming a senior.

These effects have not trickled into Division III, particularly with Webster University athletics. Other coaches have also bought into a similar process, such as men’s golf head coach Andrew Belsky also discussed the positive effects of the “character over talent” mindset, and how it has improved production within his own team.

“Personally I start with looking at academics and character,”  Belsky said. “Those are the things that are very hard to teach.  There are a lot of players that can hit a golf ball.  Far fewer who I am comfortable wearing the school logo and representing us for not only the 4 years that they are attending Webster but also for the rest of their lives following their careers as a Webster Golf Team member.”

Considering both the Gorloks’ success a season ago, as well as the predicted success of this season, win-loss records indicate that this philosophy could offer more positives for other teams in struggling situations.

Given their new situation with nine incoming freshmen, the soccer team’s recruiting philosophy may not be needed in volume in the coming years. Though, when the time comes to reel in new players, the staff is confident in its approach to pick character and academics ahead of athletics.