The area that eventually became the Meacham Park subdivision in Kirkwood was purchased for $33,308 by real estate spectator Elzey E. Meacham and his wife. Meacham officially named the area “Meacham Park” in September 1892.

John Laughlin originally owned the 150 or so acre location before he sold it to Meacham July 8, 1892, according to “Meacham Park: A History” by Lonnie R. Speer, Bill Jones and Garnet Thies.

Darren K. Smotherson has been the pastor of First Baptist Church of Meacham Park for 12 years. He said many residents in the community and from wider St. Louis are not aware of Meacham’s formational years.

“They think Mr. Meacham was a black man,” Smotherson said. “He was not. So there’s so much that people don’t know. When he bought the land around, he gave blacks a chance to buy them at a sub par price. But people, blacks don’t even know the story.”

Elzey Meacham was known to be sympathetic to the black struggle in the late 1800s and early 1900s. Aside from selling property to black people for low prices, Meacham also named the 13 streets in Meacham Park based off of people and places in black history. “Attucks” is one of these streets, named after African-American Crispus Attucks, the first man to die in the Boston Massacre in 1770. Another street is called “Spears” and is named after the first black settler of Meacham Park, Sandy Spears, who was a farmer who lived along Big Bend Road.

The Meacham Park School for Negroes eventually opened in 1911, after several years of requests from a delegation of black parents. In 1931, the Booker T. Washington School located in Kirkwood became overcrowded and the overflow of students had to be moved to Meacham Park School. The school was eventually renamed J. Milton Turner school after the Civil War leader who was born into slavery and enlisted in the Union Army in the 1850s.

All of the black children in Meacham Park eventually attended Turner School. The city razed the Booker T. Washington School due to safety hazards.

The J. Milton Turner School still exists today but has been turned into a building for offices with only a few displays commemorating its history in local education.

Meacham Park became its own self-sustained community after World War II. Alfred Minor, now 81 years old, was born in Meacham Park and spent most of his life there.

“Meacham Park was a good neighborhood [in the early 40s],” Minor said. “All the people were kind of bound together, they stuck together, helped each other out.”

Minor said Meacham Park had grocery stores, movie theater, a shoe shop and its own police department because the Kirkwood police would not come to the community if someone called them. The residents, led by Bill Jones, even produced a monthly community newspaper, “In Our Opinion.” 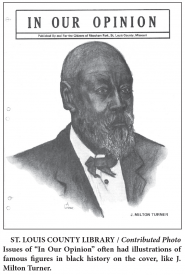 “We had everything that we wanted, and it was a good community,” Minor said.

The City of Kirkwood first annexed a 100-foot strip of commercial property in Meacham Park in 1957. Another portion in the southeast corner of Meacham Park was used to build the Interstate-44 highway as part of the Federal-Aid Highway Act of 1956.

Meacham Park struggled through the 1950s and 1960s as the neighboring city of Kirkwood progressed around it. Crime, trash dumping and home abandonment increased in these decades. Two thirds of the homes did not have indoor plumbing, according to Speer.

One of the biggest supporters of the Meacham annexation and redevelopment was Meacham Park resident Charles Lee “Cookie” Thornton, the gunman in the Feb. 7, 2008 city hall shooting.

Minor said he believes the city of Kirkwood annexed Meacham Park in the 1990s because of the area’s convenient location next to the highway.

“I wouldn’t want to live in another place because you can’t get to anywhere within five miles… you’ve got access to everything, quick access,” Minor said. “I feel kind of sad because I know it was part of the community I was from. To see it demolished like that, I won’t knock that because that could be progress. You know, nothing stays the same. We’re all for progress and that’s one of the things that happens when you’re in progress.”