Black lives matter. Police lives matter. All lives matter. This is a narrative that is circulating the nation right now and has been since black teenager Michael Brown was killed in Ferguson, MO in August of 2014. A person is not considered a part of the conversation unless they take a side. To me, the solution is not in the side you take, it is in the ability to understand the message of all sides.

There is a page on Facebook and Instagram called Humans of New York (HONY). The page is run by Brandon Stanton, who takes pictures in New York of strangers and them questions. Stanton started HONY in summer of 2010. When the pictures make it onto the social media sites, they include a brief quote that tells a bit of that person’s story. HONY is popular because it tells stories many people can relate to without focusing on race, gender, job status or sexual orientation. It only focuses on the person. It is the only place I know I can read a story about a person – nothing more, nothing less.

What is happening on the HONY page is what is missing from the “lives matter” conversation. We are pitting ourselves against one another in the name of justice. We see stereotypes instead of people. When I get on social media sites like Facebook, I can keep up with my friends. When I look at their pictures, I do not see the stereotypes people that do not know them would associate with them. I do not first see a black teenager from Ferguson. I do not first see a police officer. I first see my friends. They all have stories, families and lives. They have jobs but their jobs do not define them.

When Deputy Darren Goforth was killed in Cypress, TX on Aug. 28, the stories all talked about how he was a father, husband and friend. Pictures circulated of him and his family.

We are turning humans into symbols we are willing to fight against no matter who they are. With that we are separating ourselves from each other. We are not symbols, we are people and all people matter. 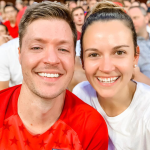