I identify as a liberal. Most of my political views lean left and I will undoubtedly be voting for a liberal candidate in the March 15 primary. When I see the American flag, I feel a sense of pride and patriotism. I love our flag and what it stands for, or at least I thought I did.

About a month ago, someone close to me said, “Why is it that Republicans suddenly own the American flag? It’s my flag too,” and it took me by surprise. I had not thought about that but it felt true to me when she said it.

Political scientists, Nathan Kalmoe of Monmouth College and Kimberly Gross of George Washington University performed a study in 2011 and 2016 that found when people see the American flag it is politically beneficial to conservatives. It does not matter which candidate is associated with the flag – liberal or conservative – the association consistently benefits conservatives.

This makes me angry. I am an American. I love this country and I love the flag. When I see it, I think of my husband and countless friends of mine that fought under the flag. My heart swells with pride every time I put something on that is red, white and blue. It is supposed to be a unifying symbol that we all stand beside each other to protect and cherish.

The inequity goes deeper. In November of 2015, a Muslim woman named Saba Ahmed wore an American flag scarf as a hijab when discussing politics on The Kelly File, a Fox News show. What followed was an stream of backlash. Many people were offended by Ahmed’s usage of the flag as a hijab, calling it an insult and tasteless. In reality, that is just hypocritical.

I just got a pair of Chuck’s a few weeks ago that have the American flag on them. I have worn them many places without people having any issues with it. I also own an American flag bikini, which has had only positive responses. I have towels, Tshirts and workout leggings that depict the American flag, all without a peep of disagreement. So why is it that a muslim woman that is an American cannot wear an American flag (scarf, mind you) as a hijab?

When the Supreme Court made gay marriage legal in the United States last year, Facebook lit up with people layering their profile pictures with the rainbow flag. I was one of those people. My profile picture of my husband and I on our wedding day was the colors of the rainbow. Not everyone changed their profile picture and I did not expect them to. I also did not expect conservatives to try and turn the American flag into a weapon against equality. Right Wing News countered the rainbow flag filter with an American flag filter, as if being gay and American cannot be something that happens congruently.

Americans need to stop using the American flag as a political tactic. The flag is a symbol of our country and everyone in it. Not just you and me, not just Republicans or Democrats – everyone. Part of changing subconscious behavior is to make that behavior known. We have to take an honest look at ourselves as Americans and make the decision to stand with each other under the American flag, openly and proudly. Be aware and choose to be better. Only when we do this can we be a unified nation as we were intended. 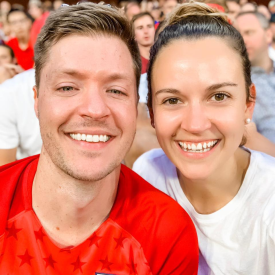