The Webster University women’s soccer team is no stranger to finishing first in the SLIAC conference, and this year is no different.

The Gorloks were voted to finish first place this year and repeat as conference champions for the fourth year in a row. Webster received eight of the 10 first place votes.

“We have a great group of women; both returners and incoming recruits that I believe have the maturity and the composure and understand of what it takes to have a successful season,” said Luigi Scire, Webster University’s head women’s soccer coach.

The Gorloks lost talented keeper Jessica Davis to graduation. Davis ended her career with the most career wins (44) and games started (54) in Webster history. She also had the second best career goals against average (0.65).

Sophomore Robin Bolme and freshman Alisa Coralic will compete for the starting position to replace Davis.

“I have tremendous confidence in both of them and I think we are going to do well,” Scire said. “They may not have the experience of a Jess Davis, but I do believe they have the ability and the talent to continue doing great things at the keeper position.”

Other than their goalkeeper, the Gorloks are pretty experienced on the field behind captains Lauren Pratt, Lauren Nuelle, and Ashley Mess. Mess and Pratt are seniors, while Nuelle is a junior. Between the three, they have 57 total games played in 2014.

Pratt was third on the team in points (20) with six goals and eight assists. Mess had 10 points and Nuelle had six. 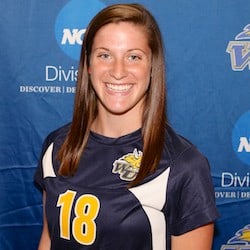 One of those six returning starters is Webster University female athlete of the year, sophomore forward, Kayla Dye. Dye led the team in total points (29) and was second on the team in goals (10).

Scire believes more of the team’s offensive output will go through Dye this year.

He said Dye hasn’t let her early success get to her though.

“Even though she was newcomer of the year, offensive player of the year and all-region, when you talk to Kayla, she is not satisfied.”

“Coming off the Female Athlete of the Year status is very stressful and intimidating but I plan to use it as a way to show me how good I actually am,” Dye said. “I was nowhere near perfect last year. … I look at the things I did wrong last year and the things I need to improve on then I can go no where but up from where I am.”

Dye continues to have confidence in, not only herself, but the team as well. Dye believes they are talented enough to go undefeated this year.

“This team is more than capable of making it to the NCAA tournament and beyond. If we continue with the pace and pressure from our coaches that we’ve had in our preseason then I think we will make if far,” Dye said. “This year I see us being undefeated in our conference and making it back to the NCAA tournament and to at least the third round.  I have confidence in at least that, but honestly if we all are on our game I don’t think anyone will be able to stop us.”

The Gorloks’ first game is September 1st at Illinois College. 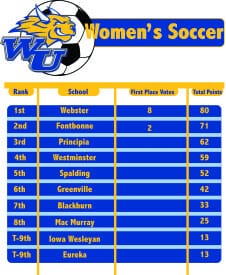