Gov. Mitt Romney made history during his nomination acceptance speech at the Republican National Convention two weeks ago, but not the kind most Republicans look forward to remembering. It was the first time since 1952 that a Republican presidential nominee did not mention war or terrorism during his acceptance speech. This is for a good reason.

For the first time in history, a democratic president has out-hawked republicans on the issue of national security. Obama conducts foreign policy as if he were Rambo. Make no mistake about it; RambObama is a cold-blooded killer ready to bust through your roof in an explosive, cinematographically perfect sequence of M60 machine gun shells falling to the floor as he single-handedly kills every AK-47-wielding bad guy in the room. 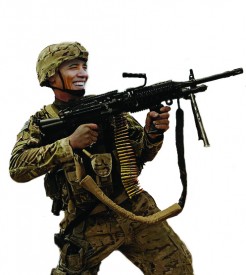 Unlike Rambo, RambObama does take prisoners who he summarily sends to secret prisons around the world to avoid constitutional rights where they are tortured, sometimes for years. They are not given legal representation, a reason for their capture, or even a bucket to go to the bathroom in. In many cases, these tortured prisoners are American citizens like presumptive Wikileaks co-conspirator PFC Bradley Manning.

When RambObama is feeling especially blood-thirsty, he whips out his remote-controlled, unmanned aerial drones and fires a couple of cruise missiles at suspected American terrorists in foreign countries, like Anwar al-Awlaki last year. Just a few days ago, a drone killed Saeed al-Shihri, Al Qaeda’s second-in-command, in Yemen. Without any repercussions or domestic backlash, there have been hundreds of drone attacks in multiple countries against alleged terrorists in Yemen, Somalia and even the Philippines. Toppling Middle-Eastern dictators, like Libya’s Muammar Gaddafi, is one of his favorite pastimes for this George W. Bush on steroids. He almost tripled the amount of troops in Afghanistan and started bombing terrorists in Pakistan on almost a daily basis. On top of all this, the United States finally brought Osama bin Laden to justice under RambObama’s watch.

Because the president’s tactics are incredibly effective, Republicans, including Romney, don’t want to touch foreign policy. It is a losing issue for them. Terrorist networks around the world no longer have the ability to project their power against the United States. In many cases, terrorist organizations are more focused on causing trouble in their own neighborhoods rather than attempting to blow up a bomb in Times Square or on an airplane over American airspace.
Overall, if Republicans want a remote shot at regaining the White House, they must tackle foreign policy head-on. If Romney continues to claim the president is conducting foreign affairs incorrectly without suggesting alternative options, then he greatly reduces his chances of looking presidential and professional, especially after his series of verbal gaffes during trips to Great Britain, Israel and Poland. His inability to lay out a clear, decisive and different approach and plan than Obama’s current strategy will end up costing him votes come election day.

And to say “Russia is public enemy No. 1 ” is not the right way to go about doing this. Romney may be correct in some regards. Russia does create geopolitical problems for the United States, but to say that Russia is the United States’ biggest enemy is unintelligent. Anyone who actually believes that Russia is our biggest enemy is clearly stuck in a Cold War mentality and is out of touch with the reality of world affairs. If President Obama said that Russia was a bigger enemy than, say, al Qaeda, he would never hear the end of it. Yet, Romney has continuously gotten away with keeping his policy plans to himself.

Either way, Republicans are way too focused on the Reagan-era question “Are you better off than you were four years ago?” Ask Osama bin Laden if he is better off than he was four years ago. Creating jobs will be the No. 1 issue of this election, but when debate moderators start asking questions on foreign policy, Romney needs to be prepared to come up with a clear strategy that is different than Obama’s if he wants a chance to win the White House.