Steve Baer said the breeze flowing into the small, quaint rooms in the Pearson House was nearly all it took for him to change his major. He said the architecture of the old mansion and the faculty there drew him to Pearson, where he would stay for the remainder of his college career.

“That place kind of made me who I am today,” Baer said. 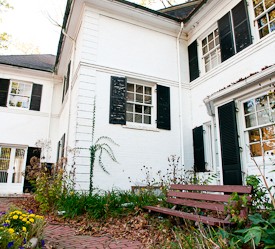 MAX BOUVATTE / THE JOURNAL The Pearson house, built in the late 1800’s, may be demolished to make way for space for the master plan.

Starting out at Webster as a film production major, Baer said taking a science fiction course in Pearson helped him make the decision to change his major to English and creative writing. However, Baer is now worried the house that holds so many of his college memories will eventually disappear. Demolishing Pearson is one of the proposals Sasaki & Associates made to faculty and residents Feb. 21. Sasaski & Associates is the firm Webster hired to help create the master plan.

During construction of the master plan, tearing down Pearson (which hosts the English and philosophy departments) was one of the options the firm presented to make space for other buildings.
Students like Baer hope the administration will not consider that option.

“I think Webster will be losing a good amount of history,” Baer said. “It’s just such a great structure and to build something brand new would be great. I’m not opposed to change, but I think building a brand new building and then letting that classic structure kind of go to waste would mean losing a lot of tradition.”
Karla Armbruster, an English professor, said she believes demolishing Pearson could have dire consequences on the English department’s enrollment.

“I think it will destroy our program in the English department,” Armbruster said. “The students that we get are the kind of people who want a small and homey environment where they are interacting with faculty, and other students.”

Armbruster said Sasaki & Associates didn’t give her any reason to believe they can recreate the ambiance Pearson has.

“The Sasaki firm said, ‘Oh, you can recreate that environment in a 90,000 square foot building,’ but they did not give me any evidence to prove that, or any samples of places that can happen,” Armbruster said. “I have a pretty big imagination, but I can’t imagine how you could do that.”

“It’s what makes us different from other schools,” Armbruster said. “If we become like other schools, (certain) students won’t have any reason to choose us. I don’t know what will make us stand out. I don’t know how Webster will benefit from big, anonymous buildings. Students come to Webster because we are not like that.”

However, Bill Barrett, a member of the master plan faculty committee, said massive plans like these often take time to complete, and are often changed.

“Plans like these are always being tweaked,” Barrett said. “No one’s going to be at Pearson with a wrecking ball tomorrow.”

He said he is certain administration will be open to those concerned.

“Something about the Pearson house that was so cool was that you had a limited array of majors,” Baer said. “The space that (Pearson) created for people to communicate with each other and to interact with one another is where people could socialize, but then you also had some private places, as well.”

Baer said some people don’t understand why he is upset about Pearson potentially being torn down, since he is no longer a student. He said he wants others to have similar experiences he had while still a student, which has led to his concern for the building.

“I really believe if it wasn’t for the allure of that place and the draw, and uniqueness of it, I wouldn’t have been in the English department; I wouldn’t have gotten into philosophy at all,” Baer said.

Baer said he trusts that Webster administration will listen to faculty and students who wish to keep Pearson the way it is. He said when he was a student, Webster was sensitive to others’ opinions. He said when the university initiated the master plan in 2011, there was a space on the master plan website asking for suggestions and comments — something Baer appreciated.

“I’d like to see a plan that takes into account the opinions of the English and philosophy departments, and people who like Pearson, and just be open to that,” Baer said.

Baer and other members of the Webster community have made an effort to have their concerns addressed. On Feb. 22, a Facebook page online was made called Save Pearson House, which had more than 120 likes at the time of this publication.

“You’d be losing a great, unique space that you really can’t get back with a new structure,” Baer said. “There’s just a certain charm about those old structures; it’s irreplaceable.”