When Julian got his left ear pierced he began to gauge it, which is basically the act of stretching the skin; he did it gradually like you are supposed to. When he decided to gauge his right ear, he got a little impatient and tried to stretch it too fast — his ear lobe ripped. After it healed he decided to try again, but found out quickly that it had formed a ball of scar tissue and hurt way too much to stretch it out any further, so he kept it at the smaller size.

“When I tried to gauge it again, I just couldn’t do it. It felt like someone was taking scissors to my ear,” Williams said. The gauges are not the only body art that Julian has — a tattoo on his right wrist reads “Cleveland.” Cleveland, Ohio, is his hometown and Julian plans on getting a lot more tattoos on his right arm that symbolize his life in Cleveland. “I am dedicating this entire arm to Cleveland… places that remind me of home and where I grew up,” Williams said. He does not plan on getting the typical landmarks of Cleveland though. Julian plans to make it unique to him by getting a tattoo of the street sign of the street he grew up on, and tattooing a picture of the old abandoned building at the end of his street that he walked by everyday on his way to school. “Just because you have tattoos or piercings doesn’t mean that you can’t save someone’s life or make someone a million dollars,” Williams said.

When asked if he worried about getting a job with all of the tattoos, Julian laughed, stating that he planned to work for himself and he would never tell himself that he could not work because he had tattoos or piercings. 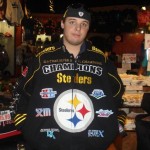