Thought-inspiring pieces from thirteen seniors filled the Cecille S. Hunt Gallery on April 22 at the Bachelor of Arts Student Exhibition.

One piece on display, a wire sculpture of a baby, was apart of Karen Avant’s “Signs of Life” collection.  On one pedestal laid the handmade wire sculpture of the baby. Its insides were filled with various colored wires to represent the transplantable organs.  On the pedestal next to it was a light switch, with wires that ran through the space between the two pedestals that connected to the organs of the baby.

“The light switch was supposed to reflect hope, technology, expectation and control,” said Avant, a studio arts major. “The wire baby is the hardwiring that we are born with.  They were separated by space, and that space to me is what was important. That’s where to miracles and disasters in life happen, so you can’t have that area unless you have the two on the pedestals.  So I had the spotlight on the center — that was my sign of life.”

Avant had been a pediatric nurse for 35 years, and always wanted a degree in studio art.  Her artwork is a reflection of many of her life experiences.

Another artist to base her work on her life experiences is Beth Krasnesky, a studio art and education major. Five of her pieces hung next to each other on a wall in a collection titled “Someday I’m going to write a book.” One of the drawings was of a Christmas tree with tiny pills as ornaments and the words, “We just assumed she was excited about the holidays.”

“I’m allergic to Christmas trees, and every year when I was little my parents would get a real Christmas tree and I would break out in hives,” Krasnesky said. “They always thought I was just really excited about Christmas and the holidays until they actually got me tested and realized that I was allergic.”

On the other end of the hallway was Kayla Jarnac’s three-piece collection about autism and social communication.  For that section she crafted several mannequin-like heads and sewed wires from their mouths and ears.

“It’s based off of a couple of parts from the autism diagnosis about different kinds of social communication problems that people have, like the difficulty to have peer relationships and sustain conversation,” said Jarnac, a studio art and Spanish major.  Another Jarnac piece was two handmade bowls and a plate made entirely of brie and cream cheese.

Across from Jarnac’s edible art stood the architectural artwork of Mike Politte, a  graphic design major, who plans to get his masters in architecture.  On the top of the pillar, which stands taller than the 6-foot-2-inch Politte, lights shine down on to different pieces of Plexiglas that he silk-screened different designs onto.  The project took most of Politte’s spare time — he constructed the pillar and the pictures by himself, and in the end it cost him about $350.00.

“It was something I wanted to do and I didn’t want to stop until it was done,” Politte said.

As many people left the gallery, they had with them the artwork of Elise Bouchard, a studio art major.  As part of her collection she made dozens of little clay cups, identical to little disposable cups.  In the middle of the gallery stood a wire trashcan, filled to the top with Bouchard’s cups.

“The cups were an idea of sustainability,“ said Bouchard. “It’s the idea that we throw our cups away all the time and I wanted to make something that was similar to that idea, but was something that you could cherish and keep with you.”

Bouchard also had another piece in the gallery.  A slab of drywall was clustered with Facebook posts, personal information, maps, and schedules of a young woman.

“Originally I was playing with public/private places, like when people act very privately in a very public place,” Bouchard said.  “It started with cars. I took photos of them when they came up to an intersection … then I spread that out to other places.  Then it moved to the internet, and all the information that we give freely that could let us track anybody.”

The student exhibition was a way for the senior students to display their artwork and bid a final farewell to Webster University. 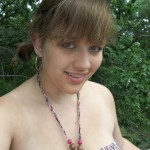