This is easily one of the best seasons of television I’ve seen in years, even though it’s barely over an hour.

We’re only two months into 2022, but I’m confident that Adult Swim’s “Smiling Friends” will go down as one of this year’s best shows.

“Smiling Friends” was created by Michael Cusack and Zack “psychicpebbles” Hadel, who also voice the lead characters Pim and Charlie, respectively. The duo have years of experience with internet animation on platforms like YouTube and Newgrounds, which gives them a distinct voice that mainstream entertainment desperately needs.

The pilot episode, “Desmond’s Big Day Out,” premiered during Adult Swim’s annual April Fool’s Day shenanigans on April 1, 2020. After it received widespread acclaim and became the highest-viewed episode on the network’s website, Adult Swim greenlit the first season. A second season was greenlit after it premiered. The unprecedented online reaction speaks volumes about the pilot’s quality, and the rest of season one is just as amazing.

The titular Smiling Friends are a small business that specializes in bringing joy to anyone that needs it – and boy, do people need it. Pim is a ray of sunshine, whereas Charlie is a more cynical everyman. As cliche as these archetypes might seem, neither of their personalities are completely defined by tropes, which makes their dynamic and interactions feel more realistic even when they’re put in completely bonkers situations.

Like many adult animated comedies, “Smiling Friends” covers dark topics, from depression to talking people out of suicide. However, the show takes a refreshingly positive approach to this material. Other shows suggest that the world sucks and therefore nothing matters, but in “Smiling Friends,” there’s always a reason to smile and have hope. No matter how twisted or comedic that reason is, any reason to keep living is meaningful.

This perspective is a much-welcomed counter to other adult shows – especially “Rick and Morty,” which inspired an insufferable fanbase of self-proclaimed intellectuals who think Rick’s apathy is cool. On the contrary, “Smiling Friends” frequently mocks nihilists, best seen in the standout episode “Frowning Friends.” Pim and Charlie’s evil doppelgangers, Grim and Gnarly, are sniveling edgelords who backtrack on their beliefs when put under pressure.

The show’s absurd humor and improv dialogue feel right at home on Adult Swim. Many of the best jokes are accentuated by the visuals; characters are animated on ones so they appear to move ridiculously fast, and certain scenes combine different animation styles that wouldn’t be out of place in shows like “Chowder.” Other gags are subtly built up through mundane dialogue until the punchline hits around the credits.

Those familiar with internet culture will love spotting subtle cameos and references, which thankfully aren’t intrusive for viewers that don’t get the reference. For example, Desmond from the pilot is voiced by Mike Stoloska from RedLetterMedia. The absolute funniest cameo comes from the season finale; without spoilers, I was caught off-guard by a huge celebrity at the end. You’ll know exactly who I mean when you hear his heavenly voice.

With only eight 11-minute episodes, including the pilot, it’s a very short watch. Those eight episodes are such a great time, however, that it doesn’t even matter. In fact, it’s refreshing to have such a short season. This show is fast-paced, consistently hilarious and highly rewatchable, so I wouldn’t be surprised if I watch it again this week alone.

The only major complaint I have with “Smiling Friends” doesn’t involve the show itself, but rather, how it was released. Adult Swim premiered the full season on Jan. 10, then released it on HBO Max on Feb. 9. Isn’t streaming the proper platform to drop entire seasons at once? By the time I finally watched it, most of the best jokes and cameos were spoiled on social media.

This would be less annoying if HBO Max worked properly. The streaming app frequently stutters or crashes entirely, and the navigation is unintuitive on smart TVs. For “Smiling Friends” specifically, I noticed that the autoplay feature never activated at the same time each episode, meaning that it accidentally skipped post-credits gags in episodes three, five and six. A series with a full arsenal of Chekov’s Guns doesn’t deserve that.

Considering the show’s only issues are outside the creators’ control, it only further proves why younger creators like Cusack and Hadel deserve more input in mainstream media. Higher-ups hold entertainment back because they only envision content through the lens of dying mediums like television, instead of embracing growing creators and mediums. If those higher-ups want to revitalize entertainment, they need to understand how audiences engage with content.

Hollywood frequently hires internet creators to replicate their success, with mixed results. In cases like “A Little Late with Lilly Singh,” tired television formats like talk shows limit creativity, losing what makes their content appealing and modern. Meanwhile, “Smiling Friends” feels like a fully-funded Newgrounds cartoon because it doesn’t compromise its creators’ voices and experience. It’s authentic, innovative, unique and many other traits that mainstream entertainment often lacks.

Pim and Charlie deserve a five-star employee rating for giving me the widest grin imaginable when watching “Smiling Friends.” This is easily one of the best seasons of television I’ve seen in years, even though it’s barely over an hour. If you’re on the fence about watching it, then at least watch a few clips on YouTube and see why internet creators are the entertainment industry’s future.

“Smiling Friends” is rated TV-MA and is available to watch on Adult Swim, HBO Max and Hulu with live TV. 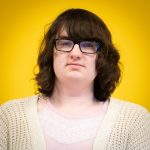 Sean Mullins (she/they) is the managing editor and webmaster for the Journal, formerly the opinions editor during the 2021/2022 school year. She is a media studies major and professional writing minor at Webster University, but she's participated in student journalism since high school, having previously been a games columnist, blogger and cartoonist for the Webster Groves Echo at Webster Groves High School. Her passion is writing and editing stories about video games and other entertainment mediums. Outside of writing, Sean is also the treasurer for Webster Literature Club. She enjoys playing games, spending time with friends, LGBTQ+ and disability advocacy, streaming, making terrible puns and listening to music.