Wake up, workout, shoot hoops, eat, shower, go to class, do homework, shoot hoops, soccer practice, basketball practice, eat again, ice muscles, lights out and go to bed. This is a regular day in the life of Mark Moore, a freshman on the Webster men’s basketball and soccer team.

Due to COVID-19, the basketball season was pushed back and collided with the soccer season, forcing some two-sport athletes at Webster to prioritize one sport over the other.

Moore always wanted to play basketball in college until the men’s soccer coach, Michael Siener, saw him play and told him he could play both sports at Webster.

“[Moore] is extremely focused and organized. With his background of playing multiple sports in the past and juggling work along with everything he does, I knew it would be a challenge to do both schedules,” Siener said, “but he is probably in the minority of student-athletes that can pull it off and not be very overwhelmed.”

As of right now, Moore is prioritizing basketball over soccer. He is putting in a lot more work for basketball and will miss the first two soccer games to play basketball.

“It might be difficult for me to get playing time in soccer games because if someone plays well at practice and I’m not there, I really can’t show what I can do,” Moore said. “It’s something I just have to live with because of what I choose and something I knew would happen going into it.”

Moore was a versatile athlete in high school. For soccer, he was First Team All-State, Conference Player of the Year, Regional Offense Player of the Year, among many other things. For basketball, he was a two-time All-District Nominee and First Team All-Conference his senior year. He also broke a school record for 73 goals and 39 assists in his soccer career at Hillsboro High School.

Both Siener and Basketball coach Chris Bunch understand Moore’s situation and communicate with him weekly to try to monitor his workload.

“We understand that Mark will be an important part of both of our programs, so we work together to ensure that he can play both sports without burning him out, so to speak,” Bunch said. “Mark is one of the more dedicated and focused players that we have ever had in our program, especially as a freshman.”

Moore played four sports in high school, so he is used to having to time manage between sports and school. He said this year has been easier with COVID-19 since there are not a lot of social events and he can get enough sleep.

“If I do not get at least nine hours of sleep, I really feel it the next day,” Moore said.

Moore has only one class per day and said it was easier to have online classes because he has more free time to do his schoolwork.

Whenever Moore feels worn out from the day, he thinks about the fact that seasons will not interfere with one another again. He also thinks of his dad.

“When my dad was 18 and in the army in Panama, he was dealing with way worse stuff than I am at 18. I’m just playing sports, so it cannot be that bad,” Moore said. 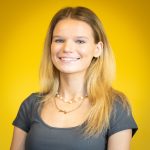 I am a journalism major. I play on the women’s soccer team at Webster. I enjoy coffee, Mexican food and watching The Real Housewives of Orange County with my sister.