Cupcakes and pride flags were passed out on the steps of St. Louis City Hall the week of Oct. 12. Lot’s Wife Trans and Queer Chaplaincy hosted pop-up elopements during the Supreme Court hearing for the nomination of Amy Coney Barrett.

The front of St. Louis City Hall had balloons tied up outside and people gathered around to witness and cheer for happy newlyweds. What set this apart from any other wedding? The newlyweds were elopers, determined to get married before the confirmation of Amy Coney Barrett.

Those in attendance were holding mini pride flags, given out by the organizers with the Lot’s Wife Trans and Queer Chaplaincy.

Lot’s Wife Trans and Queer Chaplaincy, a nonprofit organization focusing on serving LGBTQ individuals, arranged elopements along with vow renewals at the St. Louis City Hall to encourage people to express their legal rights to get married under the equal marriage law. The event took place Oct. 12 through Oct. 15, during Amy Coney Barrett’s confirmation hearings.

The marriages performed included partners from various backgrounds and religions. According to Pastor Tori Jameson, who helped organize the event, there were two dozen officiants, over two dozen volunteers baking cupcakes for the newly-married and photographers.

The elopements were meant to symbolize acts of protest as well as love. Sixteen couples were married over the course of the three-day event.

Jameson said part of their inspiration for conducting the event came from the anger they felt.

“As a community activist and as a pastor, I wanted to be able to do something with the mad I was feeling about [Barrett’s] nomination,” Jameson said.

Barrett’s nomination to the Supreme Court has caused unrest for those who are part of the LGBTQ community. The elopers believe that Barrett would want to roll back equal marriage rights along with protections under nondiscrimination in the workplace and the Affordable Care Act.

However, anger was not the only emotion the organizers were feeling. Pastor Sharon Autenrieth with the Chaplaincy advocates for the idea of joy as an act of resistance.

“Rather than just fear the future, let’s act in a way that is positive and joyful to exercise people’s marriage rights, right now,” Autenrieth said.

Some people chose to get married as part of a unique tribute. Alexus Creed, one of the newlyweds, said getting married was a way to honor Ruth Bader Ginsburg.

“Myself, as a trans-female, I rely on a lot of the stuff that RBG enacted,” Creed said.

Creed added that she and her husband also wanted to get married before Barrett is confirmed as a Supreme Court Justice. She expressed that she is afraid of the court reversing pro-LGBTQ legislature that Ginsburg helped put into place and the impact Barrett could have on the Court’s previous rulings of equal marriage.

She is not the only one worried; Jackie Harris, who was attending the event in support of her friends, said Barrett’s confirmation has the potential to change the Supreme Court for decades.

“It’s causing fear throughout all our communities. Loss of rights, overturn of Roe, there are just so many uncertainties,” Harris said.

The issue of marriage equality and other LGBTQ protections are rustling the college demographic as well. Along with the fear and anger that people are feeling, Webster University student Ashleigh Schrum said it is painful to think about how fragile her rights are as a LGBTQ individual.

“They could be stolen from us at any time, and their theft could be taken as a sign from extremists that it is okay to commit violence against us,” Schrum said. “That may sound like it would never happen, but think about the Pulse nightclub shooting just a few years ago, and the man who tried to bring a weapon into the St. Louis Pride event a couple years ago because he wanted to murder LGBT people.”

These perspectives on Barrett’s nomination are among the reasons why the Chaplaincy organized the elopements. Autenrieth said, “We do feel like marriage equality is under threat with this nomination … I hope nothing changes, but we can’t assume that it won’t. We can’t assume that the Obergefell decision won’t be overturned.”

While the organizers are battling the stress of uncertainty, they focused on bringing empowerment, happiness and support to the participants and attendees.

“If people are ready to get married, now is the time to do it while they can still exercise those rights,” Autenrieth said. “We just wanted to come together as a community and support them in that.”

Editor’s note: An earlier version of this story read 11 couples were married at the elopements. The total has since been updated to 16. 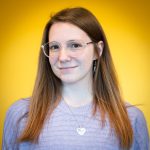 Kate McCracken (she/her) is currently a staff writer for The Journal. She has previously worked as the lifestyle editor. She is a double major in Philosophy and History, minoring in Professional Writing. She has always loved to write and create stories, and she wrote her first book at age 10. Aside from writing, Kate also enjoys photography, environmental/animal activism, paranormal investigation and oneirology, the study of dreams.