After being in construction for a year, Webster University’s Sverdrup building is nearly finished and ready for students.

About 16,600 square feet of the complex’s 64,000 square feet was renovated with improvements such as a new media commons, one-button studio, design and production lab and more.

Construction started October 2017 and the project is slated to complete renovations in October 2018.

Patrick Giblin, the director of public relations, said the college does not have the amount yet.

“We are still gathering [pricing] information and hope to have a figure closer to the grand opening,” Giblin said.

While the amount to renovate the building is unknown, Gary Ford, the department chair of communications and journalism, says the upgrades have been a long time in the making. Ford said the college started plans for renovations seven years ago.

“I think it’s just great,” Ford said. “I think we’ve waited a long time to upgrade the building. We went through a process with the faculty of what we needed or were we going to do the whole building.”

The response has been positive among students and staff, including script writing major Lorlei Ryan.

“It looks really professional, new and is clean and nice,” she said.

Paige Doetzel a film, TV and video production major agreed with Ryan and called the old design ugly and dreary.

“Take this giant hallway, just block off everything else,” Doetzel said. “It was nothing but a long hallway and there were doors that were locked that went to empty rooms.”

Ethics Professor Jan Hayes is excited for the renovations and hopes to teach in the new classrooms located on the first floor. Hayes currently teaches in room 210, located on the second floor. She said she hopes the renovated spaces will help the college to be able to connect with more people, especially across the globe.

“I think we will be able to connect with so much more,” Hayes said.  “I think it’s going to make the S.O.C [School of Communications] more cutting-edge.”

“We’ve taken the first floor and the two lobbies, or atria, on each end, and we completely gutted, completely tore out all the classrooms and revised them into a multimedia education space,” Ford said.

Courtney Powell, a new media production grad student, was one of the students in the lobby. Powell said she thinks the lobby redesigns are great.

“I think they’re trying to keep up with modern age,” Powell said. “It’s definitely a big change from what we had last year and the year’s previous. The space is more clean, modern. It honestly makes me want to sit down and study, it doesn’t seem real gloomy like it used to [be].”

Eric Rothenbuhler, the dean for the School of Communications, said the new design gives students more space to work on projects and collaborate with others.

“In terms of use of it, it’s designed to be open-ended, to be multiple use, to be flexible space, that invites people in,” Rothenbuhler said.

Alongside the lobby renovations, the Sverdrup classrooms on the first floor feature display rooms with glass walls. Rothenbuhler said the walls invite people in to participate.

He also said the renovations are a major step up from the previous design.

“The first floor down there was a long row of generic classrooms, every one of them alike, all of them kind of cramped and small and dark,” Rothenbuhler said. “All of that was gutted, and replaced with seven new teaching spaces.”

Rothenbuhler said the renovated spaces on the first floor are designed for the future of communications and media, noting the cable trays above the walkways that allow for Webster’s IT maintenance workers to swap out and upgrade equipment when needed.

“Every room is interconnected,” Rothenbuhler said. “We can interact in ways we were never able to interact before.” 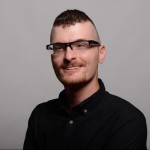