“I wasn’t great in high school. I ran a 22 minute 5k, which isn’t good.” Goergen said, “I wasn’t winning races. I wasn’t going to state. Running for a college wasn’t in my point of perspective.”

She is a four-time all-conference runner for Webster and is only the second female Gorlok  to do that.  Goergen bettered her 5k time with another personal record at Washington University this past Friday night.

“I know I can’t do what she does and she amazes me at every race because she is just so talented,” Aguilar said. “Holly overall is like a superwoman.”

Goergen didn’t think she could run in college, not until she received a letter from a Webster University coach.

“What really stood out about her was her love for the sport and her unwavering commitment.”  Graber said. “We wanted to add runners to our program that would be passionate about training hard throughout the year and she stood out as someone that would be committed to doing that.”

Goergen would train with the men’s team in high school, which showed her commitment to running. 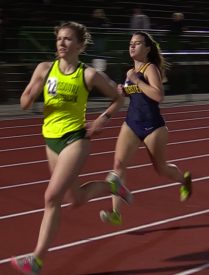 Although she looked at other schools academically, Webster was the only place she could of ran track.

Coach Graber’s first recruiting class was Goergen’s class. Graber said Goergen is committed and she trusts in the training.

“Throughout her four years, she has proven herself as our most dependable female distance runner when it comes to performing well at championship meets,” Graber said. “From freshman through senior year, her best performances have always come at target meets.”

”Her focus and mindset is why she races her best at championship meets,” Graber added.

Goergen, from Phoenix, Arizona,  started running in middle school because her parents often talked about the “glory days” of when they ran track competitively.

“None of the other girls liked to run,” Goergen recalled, “but I took a real liking to it.”

“They [Goergen’s parents] were pretty good,” Goergen said, “They talked about how they were so happy and had lots of friends. I always wanted to find that kind of happiness.”

Sophomore Meredith Sowers was at Goergens 5k run just to cheer her on.

“She [Goergen] is a huge role model for me,” Sowers said. “We run cross country track, which is a brutal sport, we are there for each other. Supporting each other comes with it.”

Running is a physically demanding sport. The runners push their bodies for speed and distance. They sometimes collapse after the race, gasping for oxygen and get sick.

Goergen said team morale and support is huge. The girls stand on the sidelines, yelling and cheering each other on. Aguilar said Goergen is like an older sister.

“She is always helping us reach our running goals,” Aguilar said.“She is always making sure we reach our maximum potential. She inspires me to keep working hard. I love her.”

The mindset for competitive running is to be your own best self.  There is great satisfaction in “PR” or personal record because this is such a physically demanding sport.

Before every race, Goergen writes inspirational quotes on her arm. She says running is 80% mental.

“Everything you need is already inside of you,” Goergen said. “Now it’s just time to show off.”

“She is incredibly driven and does a great job of utilizing the resources around her,” coach Dan Graber said. “Although she has had a lot of success, she isn’t afraid to ask for help from teammates, coaches, or other resources.  I’d say that’s been a big reason why she’s continued to improve.”

There are still some records out there Goergen could accomplish. She will race a 5k at Greenville Select, then a 10k, 5k, and 1500 at Conference. She could also leave Webster with most top 20 finishes.

Goergen has found the happiness, success and friends like her parents talked about. She has done what she didn’t think she could do, at a college that she wasn’t even aware of.

Goergen will graduate in May. She will have a degree in Biological Sciences with an emphasis in medicine. She wants to do lab research after she graduates. 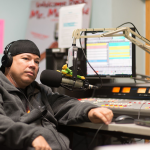