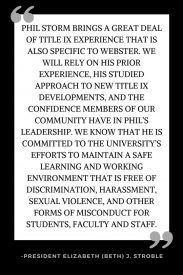 Webster also appointed Christy Herzing as the new academic ADA coordinator at the Academic Resource Center, effective Tuesday, Jan. 16. Herzing is replacing Shelley Wolfmeyer, who left the position in Oct. 2017. Herzing graduated from Webster in May 2017 with an MA in Human Resource Development.

Herzing will be available in her office, Loretto Hall room 55, and by email at christyherzing68@webster.edu or disablity@webster.edu effective Jan. 16.