After presenting a list of demands to Webster University administration, members of the Association for African American Collegians (AAAC) said it is likely they will be protesting in the near future.

AAAC President Keyra Stephens and Treasurer Yai Nikos said if the demands are not met, AAAC will protest.

“I expect [administration] to do what they always do: try to dodge us,” Nikos said. “But this time, we are going to be relentless and fighting back. Demonstrating. Letting them know that we aren’t having it anymore.”

The list, created by AAAC, consists of 19 demands and was brought to the attention of President Beth Stroble and Provost Julian Schuster. AAAC members said the demands are a result of systemic and institutionalized racism at Webster.

Nikos said the group wants administration to understand that racism exists at Webster.

“It’s not always overt and violent instances of racism, but it exists because it’s systemic,” Nikos said. “We’re here [at the meeting] because all [AAAC members] experienced institutional oppression here at this university. It exists.”

The list of demands includes a tuition decrease, the creation of an African American Studies major and minor, the elimination of bonuses for administrators, and much more.

Stephens said the list of demands are things that the group thinks would help change things on campus for the better, especially for black minority students.

“[Webster University’s] reputation is really pushing this diversity and global citizenship thing that other universities don’t have,” Stephens said. “They really need to check themselves if they’re going to be walking around saying that but not actually implementing it.”

AAAC at Webster is not alone in talking about racial oppression on college campuses. Students at many universities, such as St. Louis University, University of Missouri, Purdue University, and Yale University have made headlines with their own demands for administration. According to AAAC’s Facebook page, the group is “truly inspired by the events of the students of Mizzou.”

“What do we even mean by diverse?” Nikos said. “Do we want tokenized people of color just to show on brochures to advertise the university? Or do we actually care about what diversity looks like?”

The meeting, held Nov. 12, was originally scheduled to be held in the Loretto Hall conference room, but it had to be moved to a larger space upstairs because too many students attended. The total count was 28 people, and AAAC members said there were more students who wanted to attend that could not.

Stroble said she invited students to meet with her so she can better address concerns in the community.

“What matters to me today is that I just listen and take notes,” Stroble said. “I reach out when I feel like I need to learn more about something, so I did.” 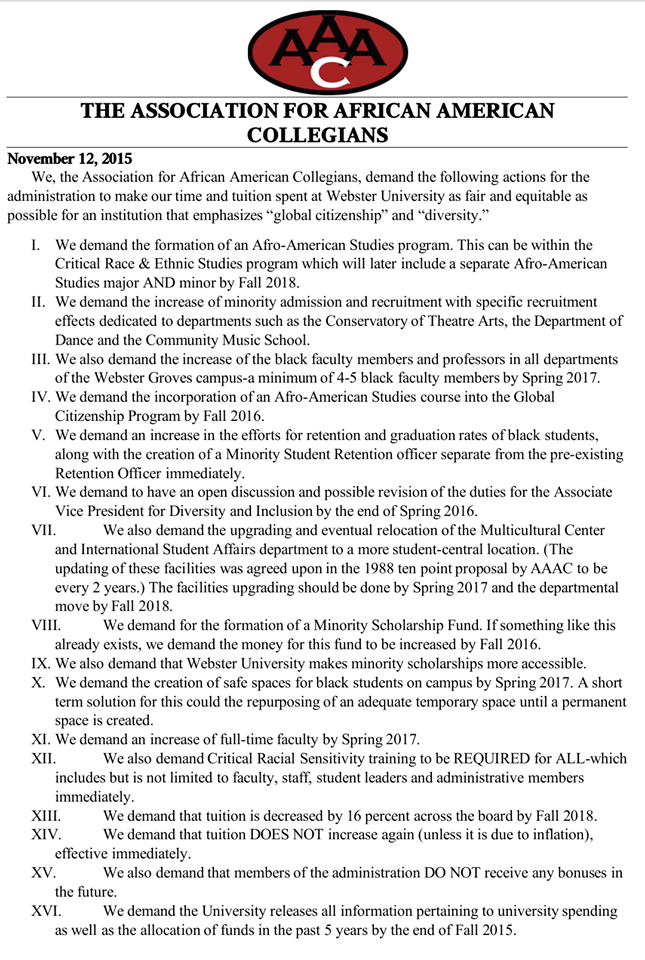 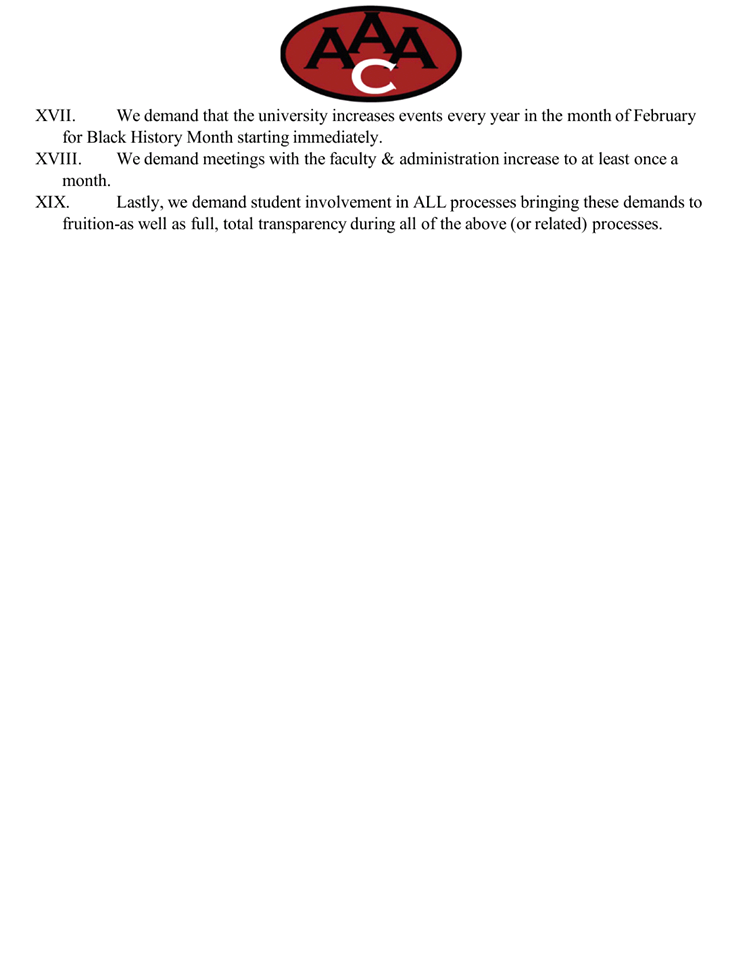 Financial aid, tuition and university spending were topics that were heavily discussed during the meeting. Six of the 19 demands directly involve money. Stephens said there many black students who leave Webster because of financial reasons and are not able to come back.

“If we want to succeed and empower ourselves and our communities, we need more of our students graduating. But we can’t do that [because of finances],” Stephens said.

Another demand on the list is that tuition is decreased by 16 percent across the board by fall 2018. Another demand is that tuition does not increase again (unless it is due to inflation), effective immediately. Nikos said black students do not have the same economic advantages as white people in this country, and that it is because of systemic racism.

“If tuition is increasing every year, who is that really affecting? I would say students of color,” Nikos said.

Another demand on the list is that administration does not receive any bonuses in the future, starting immediately. Nikos said administration receiving bonuses shows what the true motives are for the university.

“It’s about looking good and making money for administration,” Nikos said. “[Students] are just customers. That’s how we feel, like we don’t matter.”

Nikos continued to ask Stroble and Schuster questions about what he called mishandled funds.

“It just makes me wonder, what kind of school has this turned into?” Nikos said. “What kind of campus are we really trying to create here? Is it all about money, or is it about the students and investing in education?”

In addition to presenting the list of demands, AAAC members were encouraged to recall their personal experiences on campus and any other concerns they have. Freshman Vava Jackson said she has had several encounters with racism on campus.

“With housing, I’ve been a victim of slander and harassment. The people that I live with are blatantly racist,” Jackson said. “I ask my faculty who I can go to, and they tell me there is no one I can go to, that there’s no one that can fix the situation. And I feel
like I’m stuck.”

Jackson also said that she feels like most of her negative experiences at Webster are because she is a minority student.

Many concerns expressed revolved around public safety, financial aid, and the Multicultural Center. Nikos said the concerns presented by the AAAC are all things that hold black students back, and that the institution is setup to keep certain students out.

Another concern discussed at the meeting was the celebration of Webster University’s 100-year anniversary. Nikos said because the first black student graduated from Webster in 1950, celebrating 100 years does not apply to black students. He also expressed concern about the money spent on Centennial celebrations and advertisements.

Concluding the meeting, Schuster said he learned a lot not only from what AAAC members said but also from the emotions and passions that existed in the room. He said he would be more than happy to work with AAAC to make the group proud of the university.

“If you are proud, then we are doing something right. And that would make us proud,” Schuster said.

More meetings and conversations between AAAC and administration will happen in the future, Stroble said. She said it is clear that one conversation is not adequate to the number and the seriousness of the topics AAAC raised.

“I thank [AAAC] for wanting this university to be truer to its mission,” Stroble said. “I have listened with serious intent, but I know that listening is not enough. What will really tell the story is if the intentions turn into actions.”

Schuster also said the administration will not be able to solve all of the issues at once, but that they will be solved.

“Yes, hold us accountable. We do this job not to be hiding in our offices, but to be accountable to you,” Schuster said. “We will do whatever we can however fast we can, because you deserve it.”