University tax documents revealed Webster President Elizabeth Stroble and Provost Julian Schuster received a combined $100,000 in bonuses during the 2015-2016 fiscal year (FY). They also received raises to their base pay compared to the 2014-2015 FY.

The Faculty Salary and Fringe Benefit Committee Administration Proposal for Academic Year 2015-2016 document reveals a faculty salary increase of zero percent. Instead, faculty were considered for a $500 one-time extra payment on a case-by-case basis.

The document was created on April 21, 2015 and was signed by Schuster, Salary and Fringe Benefit Committee then-Chairman James Brasfield and then-Faculty Senate President Gwyneth Williams.

Webster Director of Public Relations Patrick Giblin said as a matter of policy, the university does not comment about individual salaries.

The national average for faculty salary increase for the 2015- 2016 school year was 3.4 percent, according to the Annual Report on the Economic Status of the Profession from the American Association of University Professors.

In last spring’s article in The Journal about the 990 tax documents, Williams predicted if there were administrative pay raises or bonuses on this year’s 990, many members of the faculty would be unhappy. Williams said she believes the unrest would come from the fact that faculty received no budget raises in 2015-2016. 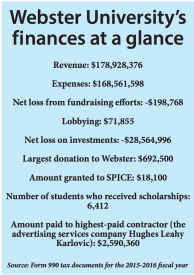 Bonuses are also known as “incentive compensation” and “at-risk compensation.” They are used to keep valuable administrators and employees from leaving the university. According to the 990 document, compensation for Stroble and Schuster are determined and approved by the executive committee of the board of trustees.

The at-risk compensation awarded to Polgar is determined based on the criteria set forth in her contract. Bonuses are decided by Webster’s board of trustees. The pay is based on performance and given annually at the board’s spring meeting. The board of trustees approves the salary pool available for increases as for all employees as a part of the approved budget for the fiscal year, The Journal reported last year.

Despite the bonus decrease, Stroble and Schuster received a base salary increase during the 2015-2016 FY. Stroble’s base salary was $335,696, w 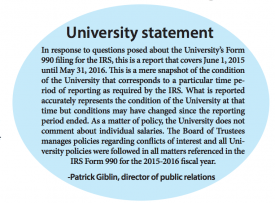 The overall median salary increase for university administrators for the 2015-2016 FY was 2.1 percent, according to the Administrators in Higher Education Salary Survey Report from the College and University Professional Association for Human Resources. This puts Stroble only roughly .05 percent above the national median and Schuster .22 percent below the national median.