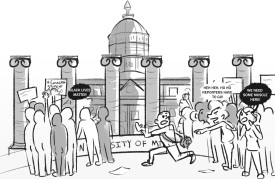 Harassing students is not okay, nor is harassing a student reporter. Last week, Mizzou student photographer Tim Tai’s confrontation with a group of #concernedstudent1950 protesters resulted in an outrage in the field of journalism, and for good reason. These students pushed Tai away as he tried to explain his rights granted by the United States constitution.

The first amendment allowed Tai to take photos on public property, plain and simple. The protesters hurt their own cause by harassing a reporter who was only trying to document history. Tai, who was reporting for ESPN, handled the situation incredibly well; not getting frustrated and standing his ground, all in the name of our freedom of speech – the very freedom that allowed those students to protest.

Even more unnerving was the blatant disregard by members of Mizzou’s faculty. A Mass Communications teacher asked for students to provide muscle to remove Tai’s unnamed videographer whose video went viral.

She has since been removed from her post in Mizzou’s journalism school and landed in some very hot water, and for good reason. A teacher who is supposed to be teaching students to protect our speech, instead acted with the crowd to silence it.

This is an example of why media law and classes on the first amendment are imperative courses to any developing student, communication major or not. Last year, The Journal reported that the School of Communication’s required courses for some majors would be altered due to curriculum changes.

That included Law in the Media, Ethics in the Media and, arguably the most important course, Cultural Diversity in the Media. These courses are now just ‘strongly recommended.’ Tai’s confrontation should be a perfect example of why this was the wrong move.

Any student who may have to deal with the press should be well versed in media law to protect themselves, and to see it take a backseat in Webster’s curriculum is unnerving.

Even more important is the protection of the first amendment. In this case, Tai literally had every right to take photos. The reporters around him had every right to ask questions. At a public university, on public property owned by the state, anyone is allowed to report, photograph, etc.

While the protesting students produced signs the day after, stating the incident was a “teachable moment,” the confrontation in itself cheapened their movement and ended up possibly costing two professors their jobs.

It is important, as a democracy, that Americans are properly informed. Without the free flow of information, the people cannot make an informed decision about matters such as #concernedstudent1950. The movement should be welcoming press, not oppressing it.

Unfortunately, the actions of #concernedstudent1950 are just major examples of the growing disregard and disrespect for student media, nationwide. Maybe I am just a grumpy journalist, but at the end of the day it is not about journalism. It is about our freedom as Americans.

When you push the boundaries on free speech, you traverse a slippery slope.