On Nov. 11, the university announced a projected $12.2 million shortfall for the Fiscal Year 15 (FY15). The university has hit its undergraduate goals for the fall semester and reduced the amount of discounted tuition by two percent. But Webster relies on the graduate program for 65 percent of its total revenue and the graduate school enrollment has dropped another 7.5 percent.

The counseling program has seen the largest drop with a decrease of 13.3 percent. While other programs in the graduate school saw larger percentage drops none of those programs accounted for as many student as counseling. 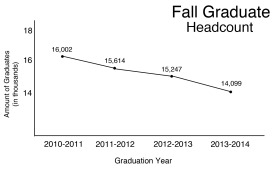 Provost Julian Schuster cited a lack of foresight when creating the graduate program for the sharp decrease. Schuster said, during a meeting on Nov. 18, that when the counseling program was created it was done without the accreditation from the Council of Accreditation of Counseling and related Educational Programs (CACREP).

“We grew a program without adequate faculty support,” Schuster said. “We are reaping what we sowed.”

Schuster said the counseling school has seen the largest drop in total students and that Webster is committed to getting the program to where it needs to be to get accredited by CACREP. Webster has hired multiple full-time faculty to get the program accredited at three of Webster’s campuses; Webster Groves, South Carolina and Florida.

The university hopes with proper accreditation the program can see an increase in enrollment.

Schuster said that down the road the university will need to consider additional accreditation for the MBA program but it is not as pressing as the counseling program, which is not accredited by CACREP, the primary accreditation agency for counseling.

Decreases in graduate enrollment have been seen in the university for years. However, Webster’s decline had stayed consistent with the national decline reported by the Council of Graduate schools. Until the 2012-13 school year when Webster saw a sharper decline than the rest of the nation, with enrollment dropping 2.3 percent and the national average only dropping .02 percent. 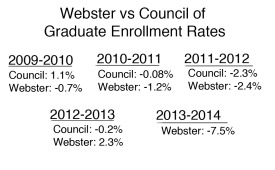 To increase graduate enrollment the university also plans to offer certificates in the graduate program to encourage students to return who may not wish to go for a masters degree.

Schuster said the university needs to focus on fewer, “higher integrity” campuses instead of over-stretching the university’s resources.