In October 1994, the first-ever banner advertisement ran on the digital version of Wired magazine, called HotWired at the time. According to the New York Times, the banner ad was successful in getting clicks 44 percent of the time, versus today’s average of 0.1 percent. What made this AT&T advertising so successful was its storytelling.

The banner created a relationship between reader and ad by challenging the reader to click on it. “Have you ever clicked your mouse right HERE? You will,” it read, with no sign of the AT&T logo. When clicked, the ad would lead to a virtual tour of great museums: the Andy Warhol Museum, the Louvre and many others. The creators of the advertisement wanted to communicate that idea of the Internet’s ability to “take you places,” which proved to be an ingenious way of securing clicks and brand exposure as a result.

Today, online advertising is in a significantly different era. Banner ads no longer peak the interest of Internet users, who have grown more aware of what the Internet has to offer. Marketers struggled to find new ways of engaging Internet users until a fresh approach called “native advertising” came about.

Native advertising is when marketers produce content that blends in with the format of a website (hence ‘native’) making it difficult to distinguish the advertisement from the website’s original content. Like the AT&T banner ad, it’s an attempt to transport you from the usual advertising experience. Buzzfeed, for example, is known to run many native advertisements on their website.

A Buzzfeed article called “14 Signs That Are Completely Hysterical” looks like the rest of the site’s content until the reader notices the “Brought to you by Jimmy John’s” credit beneath the title. In a box where the author credits usually appear, Jimmy John’s is cited as a “Brand Publisher.” And yes, Jimmy John’s “Free Smells” sign was featured in the article, but wasn’t included in the ranking; instead, it was coupled with a link to order it online. So you get free laughs, and they get a little brand exposure. What’s the harm?

In a New York Times article Joe McCambley, developer of the first banner ad, said, “I completely understand the value of native advertising, but there are a number of publishers who are allowing P.R. firms and advertising agencies direct access to their content management systems and allowing them to publish directly to the site. I think that is a huge mistake…It is a very slippery slope and could kill journalism if publishers aren’t careful.”

Although Buzzfeed doesn’t carry much merit in the world of journalism, some sites that do carry merit also use native advertising. Huffington Post has a whole section dedicated to “sponsored content.” Forbes has a section called “BrandVoice.” The Atlantic ran content produced by the Church of Scientology entitled “David Miscavige Leads Scientology to Milestone Year.” When publishing the ad, The Atlantic accidently forgot to include any disclaimer to separate it from the website’s own content. This mishap encouraged The Atlantic to come up with guidelines for its use of this type of content.

To me, labeling this type of advertising as “sponsored content” is purposely misleading. It sounds like the content is funded by the brand, not created. I find this practice exploitative of the reader’s trust. The content is usually a branding opportunity in itself, so how can it ever be credible? I find this exploitative because a newspaper is supposed to help me understand who to trust. Instead they set me up to misplace it. 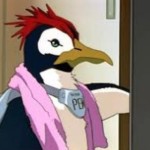