The scene was set up like a movie. With two outs in the bottom of the ninth inning, a college pitcher stood on the mound. If he made the last out, he would seal the win for his team and etch his name in his school’s record book.  But this was no movie.

Then-redshirt sophomore Dylan Dean Smith was one out away from pitching Webster University’s first no-hitter in an April 2013 game against MacMurray college. Smith returned to pitch that game after being 18 months removed from torn labrum surgery.

The Strain of the Pain

Gorlok Head baseball Coach Bill Kurich knows the risks of getting this shoulder surgery and the small likelihood of pitchers returning to full form.

Smith, now a redshirt-senior, said he never had shoulder problems until he got to Webster. During his freshman year, Smith would pitch during a game or practice and the next day, his shoulder would be so swollen he could not lift his arm up past his shoulder.

Smith got an MRI in the fall of his second year at Webster and found he had a torn labrum. His doctors estimated his likelihood of recovery and returning to the level he was at his freshman season (4-0 record and 2.54 ERA) was at 85 percent.

But Smith viewed the doctor’s prognosis as a 15-percent likelihood he wouldn’t return to par.

After discussing it with his parents, Smith underwent the surgery in October 2011. Two weeks later, he began rehab.

Will Carroll, a sportswriter who specializes in medical issues, wrote in a 2004 Slate.com article that a torn labrum is “baseball’s most fearsome injury.” Carroll compared a pitcher tearing his labrum to a horse breaking its leg. The protocol when a horse breaks its leg is to put it down so that it is spared the pain.

If Smith’s labrum is a horse, then he has ridden his back to health.

Over two years removed from the surgery on his “fearsome injury,” Kurich said Smith has become  a better player than before.

“Dylan may have lost a mile or two in velocity off of his fastball, but he has come back as a much better pitcher than he was before the surgery,” Kurich said. 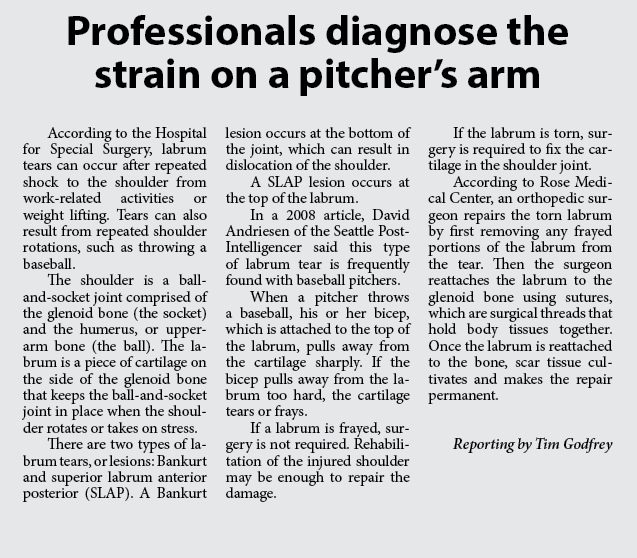 Kurich said Smith has not only gotten better, but smarter. While he was out for the 2012 season, Smith took the opportunity to study the game.

“I just watched each pitcher and I would pick out something they were doing,” Smith said. “I had an objective to learn about everyone’s little tendencies.

“I watched mechanics, pitch calls and pitch counts to see if I could pick up anything that was helping the batters guess what was coming.”

Smith applied what he learned to his own game. So far this season, he holds a team-leading 5-0 record and a 1.88 ERA.

Teammate and friend, Zach Schneider, said he sees the change in Smith as well. Schneider said Smith has become a more developed pitcher.

“His maturity has made him a better player on the field,” Schneider said. “He’s pitching (the ball) instead of just throwing.”

But it was not easy for Smith to get to his current level.

Three times a week for eight weeks, Smith spent time with physical therapist Jim Host at the PRORehab Center in Brentwood. Host put Smith through stretching routines and workouts with light weights and resistance bands. Host said that baseball players usually come in for rehab feeling down about their injury and the work they need to do to regain their full health. But Smith came in ready to work.

“Any thrower that comes in with a shoulder problem, their emotional state is fragile,” Host said. “They’re still trying to digest it’s going to be a long haul, and there is some question whether or not they’ll come back at all.

“When I met Dylan, he had already come to terms with the injury, the surgery and was ready to do rehab with the goal of getting back on the playing field.”

When Smith would finish working with Host, he would watch his teammates practice while he sat in the dugout. Missing the 2012 season alone was “disheartening” for Smith, but sitting out when the Gorloks earned a Division-III World Series berth, was tough on him.

Smith’s rise back to form was a difficult one, but it’s a rise the Gorloks hope to use to their advantage as they aim to return to the Division-III World Series. Smith said he has no pain in his shoulder anymore, but the fear that his labrum may re-tear still lingers.

“There is always a fear, but you can’t think about those things,” Smith said. “I just throw that out completely and not even worry about the pain anymore.”

When he was on the mound in April 2013, Smith said he wasn’t worried about the pain or the no-hitter. He just wanted to win the game for his team.

“Going to rehab for eight weeks, being in a sling, putting up with all the throwing and sitting on the bench at practice – all the hard work I went through paid off,” Smith said.