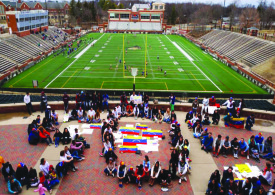 Webster University student Abby Contreras has spent every spare moment since Feb.12 in distress, fearing her loved ones may be in danger.

“My head has been there these entire two weeks,” Contreras said. “I can’t stop thinking about it. I’m not here, I’m there in Venezuela—I want to be there.”

On Feb. 12 in Caracas, Venezuela, students along with opposition leader Leopoldo López marched in the streets for El Día de la Juventud (Youth Day). According to CNN the march began as a peaceful protest against the government for freedom of speech, economic problems and better security. The demonstrations turned violent when three people were killed. Since then there have been several protests and many more Venezuelans have been injured, killed and even gone missing.

Contreras is one of two Venezuelan students at Webster according to the Multicultural Center and International Student Affairs. Her family and friends are participating in the student protests.

She said she spends 3-5 hours a day checking social media and spends as much time on her phone as she can to remain up to date on what is happening to her home. Contreras said it has been difficult for her family to go to work or travel. She said most people stay home and try to wait out the violence.

“My biggest fear is that I will one day check my phone and see that something bad has happened,” Contreras said. “I can’t focus on my classes because I am worried — that is no way to live.”

Hellinger said López is demanding the exit of Venezuelan President Nicolás Maduro because López is attempting to gain traction for the opposition side. He also said Lopez wants to be seen as a peaceful hero of the people.

Contreras said since the protests were heated, it was difficult for her to decipher any truth in the media. She said the president of Venezuela would not address the protests. Contreras also said there was a complete media blackout. News stations could no longer report what was going on. The only way Contreras could gather information was keeping in constant contact with friends and family.

Hellinger said he believes the Venezuelan government is under the impression that the opposition is plotting against them. Through fear, the government tried to control the media.

“The media blackout was both politically stupid and the wrong thing to do,” Hellinger said.

According to CNN, the Venezuelan government is censoring media for the public’s protection. Coverage of the protests would violate a controversial law that prohibits the broadcasting of material that “foments anxiety” or “incites or promotes hatred and intolerance for … political reasons.”

Maduro ordered U.S. diplomats to leave Venezuela, accusing them of corruption of the Venezuelan government.

Economic Problems
Louisa Hernandez is a friend of Contreras from Venezuela and attends Universidad Católica Andrés Bello and even though she tries to escape the politics she cannot escape the effect of the country’s economic inflation. She said although she grew up with the consequences of Chavez’s reign, Maduro is farworse. Hernandez said it is impossible to buy anything. Venezuela’s minimum wage, compared to the U.S., is about 21 cents an hour. A 20-ounce coke would cost $1.35 in Venezuela. Hernandez said Venezuelans need a better quality of life.

Contreras said the markets are depressing, the shelves are bare and the items are scarce. She said there are lines of people who are only allowed to buy a certain amount of items.Things such as toilet paper are hard to come by. Because of the shortage of goods, Venezuelans have to be marked with a number while waiting in market lines.

Hellinger said the best way for the opposition to truly get rid of the president is by doing so constitutionally. He said both sides have become violent and both the opposition and the government have a long road ahead of them.

“There is no use in crying,” Contreras said. “Crying is not going to help my country — but informing people will.”
She is collaborating with Amnesty International to have a student demonstration on-campus for Venezuela. Contreras said spreading awareness about the injustice of her people is most important to her.

“No matter what religion you are, pray. Pray for Venezuela,” Contreras said.

Contreras said it is sad to hear no one at Webster seems to know what is going on in Venezuela. She attended a Mass at Lindenwood University and participated in a photo where the students formed a giant SOS to symbolize St. Louis supports Venezuela. She said said it was beautiful to be with people who undergoing the same pain.