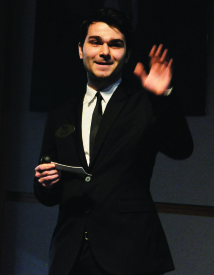 As sophomore Jesse Koons stood before his peers, family and school administration, he introduced himself, cracked a smile and waved to his mom. Koons presented the idea of offering tuition benefits to contract workers, such as custodial and food service workers hired through Sodexo and Follett, at the spring Delegates’ Agenda on Feb. 20.

The Delegates’ Agenda is an opportunity for students to present issues to the administration which they would like to see addressed.

Koons said the idea came to him while speaking Bosnian with a Webster University custodian about her child attending Webster. When he asked what kind of assistance the university was providing the student, her answer was none.

According to Webster’s employee benefits specified on webster.edu, the university offers tuition remission to full-time Webster employees as well as their spouses and children if the university has employed them for at least one year.
However, Webster does not employ these contract workers — a third party does. Therefore, neither they nor their children are offered these benefits. The entirety of Sodexo’s custodial staff is hired on full-time, and their dining service staff is a mixture of part-time and full-time employees.

“I wasn’t looking for any type of gain, but I just felt like I had that understanding that (contract workers) contribute a lot that people take for granted, and you reap a lot less of the rewards,” Koons said.

Darlene Koons, Jesse Koons’ mom, has worked as a custodian and cafeteria worker in educational institutions. Koons’ grandfather worked as a janitor, as did Koons’ girlfriend’s parents.

Darlene Koons said this awareness of their situations led her son to care about this topic and present it for consideration at the Setting of the Delegates’ Agenda.

“He knew in his heart what I went through. Not just me, but his grandfather was a custodian for a hospital,” Darlene Koons said. “It’s the underclass and the working-class workers that really need the help.”

With four children, Darlene Koons said it would have been impossible for her to send all of her children to college on her salary. She said she would have worked for a job at a university like Webster if she knew benefits like this had been available not just for her children but for herself.

Darlene Koons said seeing her son take a stand for other middle- and lower-class workers made her realize he did not “forget where he came from.” She said this was his way of making a better situation for others like him and his family.
“My parents’ and grandparents’ work ethic passed down to me is what got me to college, not their money, though they would give it if they had it,” Jesse Koons said in a message sent after the interview. “I’m just trying to honor that legacy by making it easier for those from a similar background to get the education that they deserve.”

The administration will respond to this topic as well as the other four topics presented at Delegates’ Agenda on April 3.
Jesse Koons said he is hopeful for the administration’s response, but understands the cost burden it could put on the university. The university projected a $13.9 million shortfall for this fiscal year (read the adjacent story for more information).