Student Government Association (SGA) hosted an open forum with Webster University’s Global Communications and Marketing Office in response to backlash from a university billboard along Interstate-70 that states, “Our Top Recruits are Chess Players.” 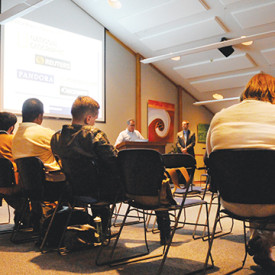 The billboard, that follows the University of Missouri — Columbia’s billboards, shows two Susan Polgar Institute of Chess Excellence (SPICE) players next to the slogan. The advertisement was supposed to be taken as playful banter between Webster and the University of Missouri – Columbia while promoting Webster, Director of Public Relations Patrick Giblin said in an Oct. 31 article for The Journal.

Costello’s presentation focused on the I-70 billboard’s concept. He said the idea to place the billboard near the University of Missouri -— Columbia athletic billboards was inspired by the slogan “Webster Football: Undefeated since 1915.”

“We think this has been, by any standards, a huge success,” Costello said at the presentation.

Director of Communications Dominik Jánsky said the university did not intend to offend students. He said no one should take the billboard literally.

“We thought there would be some pushback, but we didn’t understand the pain some people would feel from this,” Jánsky said at the presentation. “We just ask that you also see the context that the billboards are one percent of our outreach. It’s not supposed to be taken literally as ‘our top recruits are X.’”

SGA Vice President Katie Maxwell said she feels administration needs to understand it made a mistake in the execution of the billboard.

“I think what would be most beneficial is that the university is empathizing with the students in this situation,” Maxwell saidat the presentation. “We understand, especially now, that it wasn’t the intention of the university to make us feel the way that we did, but at the same time that doesn’t mean we didn’t feel that.”

SGA President Michael Grosch said he thought the university made the right move in terms of making a creative decision, but could have introduced the billboard in a better way.

“I talk to potential students all the time and I tell them ‘come to Webster, come to Webster.’ That’s me trying to recruit them. And then for me to read that (the billboard) I felt maybe what I’ve been doing isn’t as important as what the chess team is doing,” Grosch said at the presentation.

SGA Student Organization Liaison Alex Bonney said the presentation put the billboard into context. He said he could see before why some students were offended, but after seeing the presentation, he did not see it as an issue.

Bonney said the miscommunication was caused when the university failed to let students know there would be  more billboards with the same slogan.

“I feel like it maybe got taken out of context in the sense that people only knew that there was this one billboard and the university was, once again, applying more focused attention on just the chess team,” Bonney said. “I think that’s where some of the miscommunication came forward.”

Costello said he hopes the next billboard will get as much attention as the current, but understands it will be difficult.

“We want to make sure that what we come up with next is just as relevant. It’s difficult, because I don’t think we’re going to get the same PR we got out of this,” Costello said.