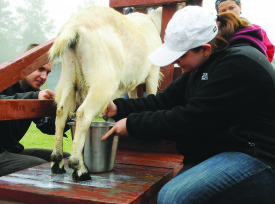 PERRYVILLE, ARK  – Two Webster University students laid on the bottom bunk of a bunk bed screaming in pain as they gave birth. A handful of students crowded in the hallway outside of the room as Amy Nelson and Gareth Anderson continued to yell.

Russell took Anderson’s hand. Their teacher Victoria McMullen sat on the bottom bunk of the bed across from Nelson and Anderson. She asked what they planned to name thier water balloon child. Anderson said Gareth Jr., and Nelson named her child Simba.

The water balloon babies were just one of many challenges given to the students on their living in poverty simulation trip. Ten students went to Heifer Ranch in Perryville, Ark. over fall break for a poverty simulation program. For nine of them, the trip was a component of their Real World Survivor class at Webster University, which will be a keystone course in the Global Citizenship Program next year.

More information on the keystone course.

At the start of the program, the Heifer Ranch program facilitators posed a question for the group to think about over their two days in poverty:

“If there is enough for all, why then do not all have enough?”

The ten Webster students and seven Maplewood Richmond Heights High School students on the trip were split into three families. Each family was assigned a different home, which represented poverty in a specific country. The countries represented were Guatemala, India’s slums and Zambia.

The Guatemalan home was made of cinderblocks and was the wealthiest of the families. The Zambia home was a circular building made of wattle and daub — sticks and concrete.

The poorest and most overcrowded home was the one that represented the slums of India. The slums were made of wood and metal, and had cardboard interior walls. The windows were open, and each end of the shotgun building had large open doorways.

The homes do not have electricity or running water, and each village contains several outhouses. Heifer Ranch volunteers led activities and instructed students throughout the two days.

The ranch volunteers limited the amount of food and resources provided for students. The three families cooked dinner together their first night in poverty.

Cristina Johnston dipped her hand into her bowl, and scooped up a sticky rice and egg meal to eat. As she ate, she stood in a crowded dark room with about 16 other students. The room was slightly larger than a Webster University dorm room.

An old floral couch and a thin wood dining table rested on concrete floors against bright yellow walls. The moonlight shone through two windows, and a small amount of light from

students’ flashlights bounced around the room.

“Not bad, it’s food,” Johnston said after taking a bite of rice. “I don’t feel full, but I feel satisfied.”

Claire Hagarty said it was difficult to portion food so that everyone had enough.

“You feel bad because you can’t give people more of what they want, but it’s all we had,” Hagarty said.

All three families ate dinner together that first night before parting to sleep under a starry sky.

Hagarty said the lumpy ground in the Zambian home made it uncomfortable to sleep. Unlike the other two homes, the Zambian home did not have mattresses. She said the Zambia family told riddles before falling asleep on their first night in the village.

All three families had chores to do between meals each day. Zambia’s chores included trimming the bushes near their home and collecting wood.

The family living in the Indian slums did yard work in the Guatemalan house’s backyard and elsewhere in the global village. Since Guatemala was the wealthiest household, they had the least labor-intensive chores. They fed chickens and rabbits, checked for chicken eggs and milked goats. Other families took turns milking the two goats as well.

After the Guatemalan home’s family finished their chores, they helped the family living in the slums with their list of chores — again coming together as a community as they did the night before at dinner.

After finishing their chores, families played cards or just talked as a family. After chores on Tuesday, every family visited the slums. All three families spoke as one group.

A bell rang to call everyone to a fake marketplace where they bought food for dinner.

The program facilitators ran the market. The Indian family gathered outside the market to discuss what they needed to buy, before they returned to the market to haggle for more food. They also considered stealing from the market since they were low on money to purchase food.

Their basket contained an onion, carrots, tomatoes, rice, salt and beans. Students made remarks about how much food they were able to buy at the market – especially after comparing it to how much food each family was given for dinner the previous night.

The Indian family said they persistently tried to accumulate food and ended up with more than they needed.

“We were so worried about not getting enough with it (the money we had), that we ended up with almost a surplus,”  Russell said.

The Indian family cooked their dinner over a fire outside their home. They could not decide what to make, so they would “throw it all in the pot.” As they cooked, they talked about foods they eat at home.

After dinner on the second day, the families gathered with the program facilitators to reflect on their two days in poverty.

The students discussed the question Heifer volunteers posed at the beginning of their two day experience: “If there is enough for all, why then don’t all have enough?”

One volunteer asked the group what causes hunger. Students shouted out answers.

Then the volunteer asked the students about potential solutions. They again shouted out answers.

Education, outreach, charity and giving back.

The volunteer asked what could make those solutions happen.

Russell thinks the trip needed to be longer. He said people need more time to better understand what people living in poverty may be going through.[pullquote]”The planning on how are we going to get our next meal, that kind of really opened my mind to: somebody else is going through this as we speak,” Brandy Lawhorn said. [/pullquote]

“If we had more time here I think it would be more indicative of people’s experiences. But at the same time I don’t even think we are scratching the surface of what people have to deal with on a day-to-day basis,” Russell said.

“If a person has not experienced it or has not gone through it or has not witnessed it, they’re not going to be quick to even care about it,” Lawhorn said. “The planning on how are we going to get our next meal, that kind of really opened my mind to: somebody else is going through this as we speak.”

Russell said he sees value in the program and is considering volunteering with Heifer Ranch. He said his family’s goal is to each person to share what they learned at Heifer Ranch with five people.

“When we get back we’re going to tell five people, and really tell, have a sit down with five people and talk to them about it,” Russell said.