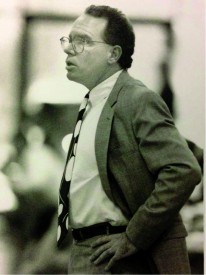 Twenty-one years ago this month was the christening of the University Center (UC). In 1992, then Director of Athletics Dr. Betsy Alden, Men’s Basketball Coach Tom Hart and Director of the UC Ted Hoef, all in their first years, wanted the inaugural swim in the indoor pool to be a memorable one. On opening night of the UC, with a crowd of about 100 Webster staff members surrounding the freshly installed and unheated pool, the three new members tossed their boss, Dean of Students Mark Govoni, into the cold, deep water. “That’s the way Tom was,” Alden said. “He was just a guy who you could go out and get a beer with after work.” Hart accepted the Director of Athletics position at Berry College (Ga.) this summer. In the 21 years he spent at Webster he: – Coached six seasons in basketball-five as head coach – Coached golf for eight years – Worked as Director of Athletics for 19 years. At points throughout his career he was pulling double duty working as both director of athletics and coaching a team. Hoef, now the dean of students at Webster, is one of the few Webster faculty members to have witnessed all of Hart’s accomplishments and improvements to Webster Athletics. Hoef worked just upstairs from Hart in the UC for the majority of their Webster careers. “The most successful All-American baseball players might hit .350,” Hoef said. “So that means six, seven times you go up to bat you’re unsuccessful. Similarly, (Hart) knows you’re going to try some things that don’t work as well as others.” Hart wasn’t a successful coach. The basketball team went 28-96 under his control, the worst coaching record in Webster Men’s Basketball history. Hoef said once Hart understood that a single person couldn’t coach and smoothly operate an athletics department, he began to properly devote his time where it was most needed. “I don’t know if you call that a mistake,” Hoef said. “One of the things he learned over time when we started new sports was to more fully appreciate what the total cost of that might be.” Hart took over as director of athletics immediately after Alden left. In his 19 years Webster added six sports and almost 150 more student athletes. Hoef said he and others closely involved with Hart learned how to better estimate costs, facilities and time that go into an evolving athletics department. Through the physical growth of Webster Athletics, also came the symbolic growth in the form of a mascot, the Gorlok, that is considered one of the most unique among U.S. universities. The Gorlok made the Sweet 16 in the 2012 Mascot Madness hosted by KCUB-AM in Tucson, Ariz. Some of the biggest redefinitions of the Gorlok have come from the athletic department. Alden led the first operation backed by the athletic department when she “de-gendered” the golden creature during her three years as director of athletics. As if she was removing the disguise of a villain, she swiped the mustache from the Gorlok’s face. “I wanted the female student athletes to feel that their mascot could be a female as well,” Alden said. “It did cause a stir, particularly with one student, but everyone survived and you could look at the Gorlok and not know if it was a male or female.” Alden had been the director of athletics for five years at an all women’s college in Baltimore, Md., before coming to Webster. Hart took the overweight, fluffy, bright-smiling Gorlok, and performed its second rebranding courtesy of Webster Athletics, this time creating a physically fit and threatening twin used only to represent Webster Athletics. “We wanted people to be proud of the team,” Hoef said. “The uniforms that our student athletes put on, we want them to be proud of and be representative of the effort being put forward. If you ask student athletes over the year, they are more in sync with the image of the new Gorlok.” The images that Hart, along with professionals he hired to help create the new, fit Gorlok, can be used only to represent Webster Athletics. Some of Webster’s international campuses have tried to or asked to use the logo. “Webster is vast, and there are folks who would like to use the Webster Athletics photo on their materials, signs and sweat shirts,” Hoef said. “We’ve had to try to protect from that.” Students of Hart Hart’s first class of recruits came to Webster in 1993. Nathan Holder from Houston, Mo., spent four years as, “no more than a role player,” by his description. In Holder’s sophomore year while playing at Westminster College (Mo.), he thought his college experience would never be the same after he tore his ACL. 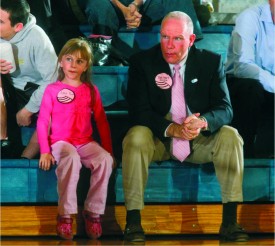 “I remember the moment I found out and the meeting I had with coach Hart,” Holder said. “There was encouragement in that meeting and a feeling that the school would be there for me. “That speaks to the personal touch. (Hart and I) talking in his office about what had happened and the way we were going to move forward and that things would work out. And it did.” He was back on the court the next season, still staring in his role player position. Holder said there were other stories about Hart. Some that he thinks were probably er stories about Hart. Some that he thinks were probably humorous and more significant, but this is the one he remembers first. Alden worked right across the hall from where Hart held all his practices during her time at Webster. She never once heard a complaint. “His student athletes all liked and respected him,” Alden said. “He was serious when he needed to be, but also could be fun and engaging with them. He didn’t take life real seriously.” That same style carried over when he became Webster’s golf coach. The Webster golf program began in 1995 in Hart’s second year as director of athletics. In 1999 Andrew Belsky, now Webster Golf Head coach, began his golf career with Webster- one that still ranks as one of the best in history. Belsky was a four-time St. Louis Intercollegiate Athletics Conference All-Conference selection. “As Tom put it early on, ‘he wasn’t much of a golfer’,” Belsky said. “The players were more experienced than he was.” With close to no experience or talent, Hart started a golf team by himself. Hart wanted Webster Athletics to grow. He decided to take the reigns and be the first golf coach of the new program. In their first SLIAC Championship Tournament the Gorlok golfers finished last place and almost 100 strokes behind the next worst team. “He knew that we needed it so he was going to do it,” Belsky said. “It was a sport that the conference was doing, so Webster was going to do it as well.” Hart coached Belsky for all four years. The respect and humility Belsky shows now wasn’t around during his playing days. “At Tom’s going away reception I had to speak and one of the things I said was that I couldn’t have coached myself,” Belsky said. “I would have kicked myself off the team. But I hopefully have gotten older and wiser.” The specific interactions between the golfer and coach will have to stay on the course. Belsky said as the hostility disappeared, a unique relationship was able to grow between them. He believed there were things they could talk about that he could not or would not with others. After Hart made the announcement that he was leaving Webster he asked if Belsky had already known. Belsky said he was just as shocked as anyone. “Looking back there were a few little things that I should have had some idea,” Belsky said. “I don’t know if I was just busy or not paying attention to the clues but he never said anything about it.” Even though his records never showed he was a good coach, the way his former players and coworkers now talk about him reflects differently. “Without him, without his interest in me coming there, I would not have come to Webster University,” Holder said. “He recruited me and visited my game at Waynesville High School and during that time he was always someone who was enjoyable to play for.” Holder and Hart were reunited recently when Holder’s nephew, a high school junior from Colorado Springs, Colo., came with Holder to visit Webster’s campus. Hart was there to greet the two. “He asked how my mom and dad were doing and called them by name and he remembered I had an older sister,” Holder said. “He wasn’t just concerned how good of a basketball player you were.” Hoef said he has seen that same kind of Hart for their entire career together. “If you talk with Tom you know he has a huge personality,” Hoef said. “He doesn’t know a stranger, he’s got a really friendly spirit about him and developed his leadership qualities over the years.” What D-III means The first time Hart visited the campus at Berry he began to learn their philosophy. To him, one of the most attractive things about Berry was their “Head and Heart and Hands,” statement on their website. The saying is meant to describe the full educational experience Berry offers. That is the same philosophy Hart has built at Webster. It was something he was doing even while he was just coaching basketball. Holder remembered each of his four years before the basketball season began, the team would go to Sts. Peter and Paul Catholic Church and they would serve dinner to the homeless. Their team was the only team that participated in this event that Holder believes was created and carried only while Hart was head coach. They did everything from set the table and cook the meal, to cleaning the tables and washing the dishes. 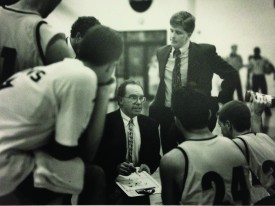 “For someone from a small town in Southern Missouri, it was an eye opening and valuable experience for me,” Holder said. “I think his strengths now as an athletic director speak for themselves.” Hart then carried that same desire for his team to affect the community when he began the golf program. He began the relationship between Webster Golf and the Maplewood High School Football team, as the “chain gang.” Every home game for the past 15 years, players of the Webster Golf team carry the bright orange, first down and line of scrimmage markers along the sidelines, as the offensive team advances down field. “We did some stuff on Webster Works World Wide, but the biggest thing that has carried over from Tom was being the ‘chain gang’,” Belsky said. “It is a way we do fundraising as a team and that is probably the biggest legacy he has left with (the golf team).” Hart also proved his passion for the academic importance of D-III. Alden and Hoef, like many who are close to him, know his obsession with the Bruce Springsteen era. Hart taught a Freshman Seminar Class titled Bruce Springsteen’s America. “The thing that stands out about coach Hart was an emphasis not only on basketball but your academic life,” Holder said. “The division III athletic experience and his concern for that I think is a tribute to him.”