Webster University women’s basketball player Tori Fenemor was banged up, tired and ready to rest. Due to an injury, she had not played basketball in two weeks, as she wanted to be ready for the St. Louis Intercollegiate Athletic Conference tournament, which begins later this week.

Fenemor’s plans changed. In her last home game at Grant Gymnasium, the senior forward had career highs with 18 points and 13 rebounds, as she led the Gorloks to a 71-61 victory over Fontbonne University on Feb. 21.
_

“I thought I was only going to play for a minute because I was hurting so bad,” Fenemor said. “I was dying, but I was just happy to be in there. (Coach Jordan Olufson) started playing me more and I needed oxygen and water.”

“It’s special to see the transformation of freshmen to seniors and where they are close to the end of their career,” Olufson said. “It was great for our seniors to go out and play well. It was a team effort — they just played well.”

Webster clung to a 31-27 halftime lead behind the shooting of junior guard Airyn Miller, who scored 10 first-half points. 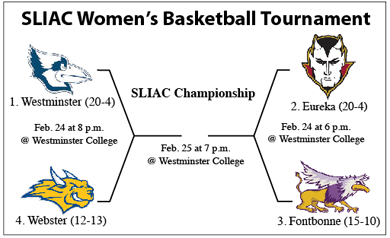 But the second half belonged to Fenemor. Receiving countless passes from Miller and junior point guard Maggie Zehner, Fenemor scored 14 second-half points in the post. Webster built a commanding 52-38 lead with 9 minutes, 30 seconds left in the game and cruised to the victory.

Miller finished with 15 points and sophomore guard Kaliann Rikard chipped in 10 points in the win.

It was the third straight victory for the Gorloks, who beat MacMurray College 64-54 on Feb. 18 in Jacksonville, Ill., and Greenville College 69-61 on Feb. 15 at home. The Gorloks’ shooting, an Achilles’ heel all season long, improved during the win streak, as they shot 46 percent from the field.

“You want to go into the end of the season playing well,” Olufson said.  “It’s huge — you get momentum, you get confidence, your players get confidence individually, which builds into the team. It’s a big effect and we’ll see what happens.”

The Gorloks have little time to celebrate the victory over Fontbonne. They travel to top-seeded Westminster College in the first round of the SLIAC tournament on Feb. 24 at 8 p.m.

Last season, the Gorloks went into the tournament in a similar situation — they were heavy underdogs, played at Westminster and upset the Blue Jays in the SLIAC tournament championship.
The Gorloks end the regular season 12-13 overall and 10-6 in the SLIAC.