The St. Louis Intercollegiate Athletic Conference voted to explore adding a 10th member to the conference, and Iowa Wesleyan College is the frontrunner to become the first new member since Spalding University was added in 2009.
At the SLIAC council meeting in May, a motion was made on adding a 10th member. At the June meeting, the motion was reaffirmed.
“We are committed to adding a 10th team to the SLIAC,” said Will Wolper, SLIAC commissioner. “We recognize the benefit to having an even number of teams and are going forward.”
The board of trustees at Iowa Wesleyan, which is currently a National Association of Intercollegiate Athletics affiliate, voted to apply for NCAA Division III membership by Jan. 15, 2012. Iowa Wesleyan will follow that up by submitting an application and an application fee to the SLIAC.
“There are a number of compelling reasons to pursue affiliation with NCAA as a member of their Division III,” said Iowa Wesleyan president Jay Simmons in a recent statement released by the college. “Chief among them is to provide our athletic teams an opportunity to be more competitive by playing colleges similar in size, budget and mission to Iowa Wesleyan College.”
Geographic location was important in the decision for Iowa Wesleyan to apply for membership to the SLIAC, and their choices were limited. Iowa Wesleyan is located in Mount Pleasant, Iowa, and it will be less than a three-and-a-half hour drive from all SLIAC schools except Spalding.
“Adding another school to our conference enhances the opportunity for the student athlete,” said Tom Hart, Webster University’s Director of Athletics. “More teams can mean more opportunities for our athletic teams.”
Wolper said an even number of teams would allow the schedule of athletic events to be more regularized. It could eliminate teams getting byes in their schedules and create better divisional opportunities. Travel expenses could be cut.
“I feel we have competed pretty well in our conference, but the trustees felt we were more like the schools in the SLIAC in size, mission and what our student athletes are like,” said Mike Hampton, Iowa Wesleyan’s athletic director.
Before Iowa Wesleyan is admitted to the SLIAC, they must first be accepted into the NCAA Division III. If that happens, there would then be a site visit by representatives from the SLIAC and a conference call with all the school presidents. A vote would then occur.
“They have quite a few sports that we do, and that helps,” Hart said. “However, we must review all the materials and see if it is a good fit. I’ll contact a few of my colleagues that are familiar with Iowa Wesleyan and go from there. They have a long way to go before they are admitted into the SLIAC. It’s not just Webster that decides.”
Iowa Wesleyan’s athletic programs include baseball, basketball, cross-country, football, golf, soccer, softball, track and field and volleyball.
Once Iowa Wesleyan makes the move, the school will be allowed to participate in regular-season SLIAC events immediately. However, they will not be eligible for postseason play in conference championships until all current students receiving athletic scholarships have graduated.
Hampton said it would be asking a lot of Iowa Wesleyan to participate in the SLIAC during the 2012-2013 season, but he hopes Iowa Wesleyan could start play in the fall of 2013.
SLIAC schools MacMurray and Eureka in financial trouble
The addition of another school comes at a time when two of the SLIAC’s schools are having financial difficulty. According to an Oct. 12 report in The Chronicle of Higher Education, MacMurray College and Eureka College are on the list of 150 private nonprofit colleges that failed the U.S. Department of Education’s most recent financial responsibility test. MacMurray’s scores were so low that they will be required to post a letter of credit equal to at least 10 percent of the student federal aid they received in the most recent year.
“We don’t like seeing sports show up on those types of lists, it’s always a concern,” Hart said. “They are working to address their financial issues.”
Although the report shows MacMurray’s scores have gone down the last two years, a statement by the National Association of Independent Colleges and Universities stressed that just because a school is on the list, it does not mean the college is in danger of closing.
“We have been a member in the SLIAC since 1990, and we have never had an issue,” said Dane Pavlovich, MacMurray’s athletic director.
Hart said dropping school sports is not always the answer in saving money either. MacMurray and Eureka both have fewer than 1,000 students enrolled, and a large part of their student bodies participate in athletics.
“If for example a school dropped softball and saved $30,000 in expenses, but lost $150,000 in revenue from student athlete enrollments, then the school loses,” Hart said. 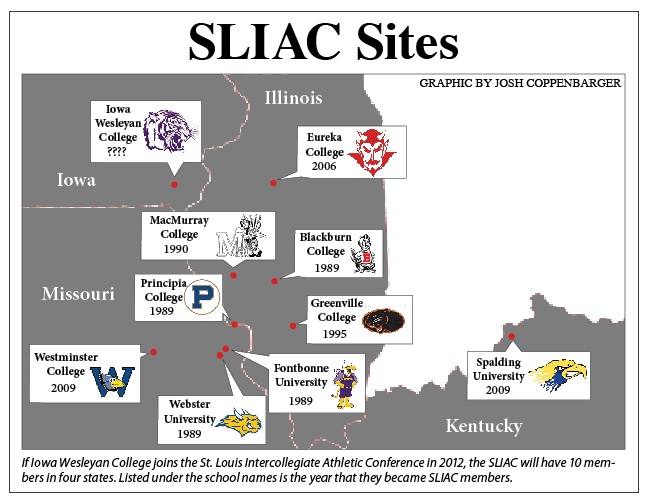