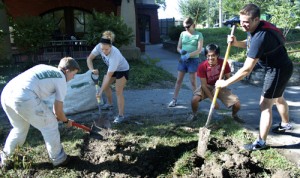 “A rain garden is a human-manufactured thing to take water that comes off of other man made surfaces…and capture that water,” Jeff DePew, WSES advisor and adjunct Webster professor, said.

After heavy rains, the water runoff from the H. Sam Priest House roof and surrounding areas often flood the sidewalk in front of the building. WSES chose this location to help reduce that flooding in a natural way.

April Tate, representative for the history, politics and international relations department, avoids the sidewalk in front of the H. Sam Priest House on rainy days. She said she’s even resorted to walking along the rock wall outside of thebuilding to avoid puddles.
The plants in the new rain garden will soak up more water than other plants and reduce flooding on that sidewalk

“It’s really cool that we’re doing something out there,” Tate said.

“I will do anything they need me to,” Harper said. “They’re doing so much good. Webster was one of the best decisions I ever made, so if I can help Webster in any way, I certainly can and will.”

Harper said she still lives in the Webster Groves area and would love to continue working with WSES.

“They could really use the support and I’m happy to give them the time that I have,” Harper said.

WSES hopes to make this rain garden, as well as future rain gardens on campus, an educational tool.

“I think it’s important for people to realize how simple it is to make (a rain garden),” Lindsey Heffner, WSES president, said. “It’s just a simple solution.”

The rain garden took the group of nine approximately three hours to complete. Before transferring plants into the garden, WSES had to remove ivy, an invasive plant, and a thin layer of rocks from the area. The group then planted approximately 10 flats of native plants. Shaw Nature Reserve donated all of the plants used in the garden.
WSES plans to install more rain gardens on Webster’s campus. They hope to install one or two larger gardens next spring.

“We may be a place where people come to find out what rain gardens are all about,” Depew said. “It’s the greening of Webster. It’s pretty cool.”