For some colleges, experts say COVID-19 could be the tipping point.

It was definitely not something freshman Marcel Dalton planned for.

The coronavirus derailed everything: his campus housing, his federal work study job, his classes.

Students like Dalton are not the only ones facing the brunt of coronavirus’ impacts, said higher education expert Mark Kantrowitz. Colleges are as well.

Kantrowitz has written five books about scholarships and financial aid including, “Filing the FAFSA” and “Secrets to Winning a Scholarship.” He has testified before congress about student aid on multiple occasions. In his decades examining higher education, Kantrowitz said he’s never seen anything affect higher education the way COVID-19 has in the past couple months.

Despite the doom and gloom, Kantrowitz said there are a few things students could do to stay afloat.

What Can Students Do to Afford Higher Ed.?

Dalton couldn’t afford to live on his own after Webster closed on-campus housing. As a trans person, he didn’t want to go home to Springfield, Missouri where people still call him by his dead name. The university’s housing office denied his request to stay on campus, so now he’s living with his family in Springfield.

Dalton said he’s waiting on more financial assistance so he can try to live on his own.

Most college students didn’t qualify for the stimulus checks over 90 million Americans have received so far. That doesn’t mean students are out of luck in finding financial aid, though. 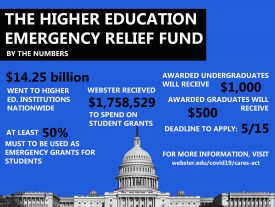 As part of the CARES Act, congress set aside $14.25 billion for colleges and universities called the Higher Education Emergency Relief Fund. Over 5,000  higher ed. institutions across the country received money through this act. What they should do with the money was simple: either spend half of it on students, or spend it all on students.

Webster received $3.5 million in total. By law, the university has to dole out at least $1.7 million of that money to students in the form of non-taxable grants. Webster announced an application students can fill out to apply for the grants last week. Awarded undergraduates will receive $1,000 and graduate students will receive $500.

Another option for students, Kantrowtiz said, is to call their university’s financial aid office to file an appeal for more financial aid.

“The FAFSA is based on prior information, so two year old information, which was before the pandemic,” Kantrowitz said. “If your income situation has changed for the worse, that is grounds for an appeal.”

A section of the CARES Act allows colleges and universities to spend up to half of the money they received to cover costs associated with instruction. That means of the $3 million Webster received, the university has $1,758,529 to spend on improving the way it teaches students during the pandemic.

The United States Secretary of Education Betsy DeVos encouraged college and university presidents in a letter to use the money to improve IT and train faculty and staff how to operate effectively remotely. She also urged presidents to consider not using the funds for institutional costs, and instead spend all of the allotted CARES Act money on student grants.

Kantrowitz compared the $14 billion comprising the Higher Education Emergency Relief Fund to a drop in a bucket.

“Any college that was on the edge of a financial precipice might be pushed over the edge because of the pandemic,” Kantrowitz said.

The $3 million Webster received is only 5% of what the university spent on instructional costs last fiscal year.

Robert Zemsky, author of “The College Stress Test: Tracking Institutional Futures Across a Crowded Market,” said in some ways, it’s too early to tell how the pandemic will affect higher education.

In his book – which published mere weeks before the coronavirus shut down the country –  Zemsky estimated 10% of colleges in the U.S. were at risk of closing. Now, Zemsky said that percentage has doubled. Zemsky and his team measured colleges’ “stress” by looking at freshmen enrollment.

“The worst situation you can be in as a college or university is having a declining freshman enrollment,” Zemsky said.

In more than half of American colleges and universities, 25% of freshmen do not come back for their sophomore year according to Zemsky.

Having a large freshmen class lessens inevitable shrinking’s blow. Students will either not want to enroll in school or will wait for things to go back to normal. Zemsky attributes this to online classes. He said students go to college mostly for the experience, not to stare at classmates behind a screen.

It’s not just the college experience Dalton said he misses. He’s had a difficult time adjusting to online classes. He majors in international human rights, something Dalton said is very community based and requires face-to-face communication with his classmates and professors. The online classes don’t come close to the education he was receiving less than two months ago.

“It’s starting to tank my GPA,” Dalton said. “I don’t think I could afford another semester if class remains online because I’m probably going to lose my financial aid.”

The Future of Higher Ed.

Enrollment is a burden weighing heavily on the shoulders of many college and university presidents. Eighty-six percent of college and university presidents surveyed by the American Council on Education said out of all the complications the coronavirus presents to higher ed., enrollment worries them the most. Seventy-eight percent of those presidents said they expected a dip in fall enrollment.

The future doesn’t look too bright from Kantrowitz’s perspective either.

“I wouldn’t be surprised if colleges had a 10-20% reduction in tuition revenue in the fall, if they’re even able to reopen,” Kantrowitz said.

Kantrowitz said there’s no doubt in his mind that higher ed. institutions will have to significantly adapt in the next few years. There will be more college closures, he said, unless the government provides more of a band-aid for colleges and universities to keep going the next six months to two years.

One thing Kantrowitz said to not expect, though, is a tuition refund.

Lawsuits have popped up all over the country of students suing their college or university. Students at Drexel University in Pennsylvania argued in a class-action lawsuit that the shift from face-to-face to online classes wasn’t worth the tuition they paid. A lawsuit against the governing board of Arizona’s three public universities demanded partial refunds for room and board and campus fees.

Kantrowitz said he doesn’t think cases like those will win as long as colleges and universities provide some sort of service.  At the most, they’ll establish tuition freezes like Webster did last fall.

Whatever the future holds, Dalton said he’ll try his best to stay in school.

“I’m a first generation college student and would hate to drop out,” Dalton said. “I’ve always felt accepted at Webster and want to stay.”