Webster graduate students Ola Ugobo and Raphael Thorpe planned to visit the Gateway Arch during winter break but were unable to due to the government shutdown.  Ugobo and Thorpe came to Webster from Nigeria to study Cybersecurity.

The five-week government shutdown closed the Arch on Dec. 22 during the busy holiday season.  The Gateway Arch lost over $600,000 according to the St. Louis Post-Dispatch.

Arionia Smith, a ticket sales agent at the Arch, said sales began to return to normal on Saturday.  Ticket sales finished just 37 short of their 1,500 goal. On Saturday, the Gateway Arch National Park hosted a celebration to thank the St. Louis community for its support during the government shutdown.

Ugobo and Thorpe were among the almost 1,500 people who visited the Arch on Saturday.

Ugobo and Thorpe have wanted to visit the Arch since they began their studies at Webster in August, they said.  The two students drive past the Arch most days on their way to Webster’s downtown Gateway campus.

“Every time I drive from my apartment to school, the interest always lingers,” Thorpe said. 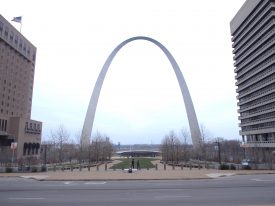 The two waited until their first winter break at Webster to attempt to visit the landmark, which reopened in July after extensive renovations.

However, the Arch closed its doors for much of winter break.  Samantha Fisher, the Gateway Arch Foundation communications director, said December brings more patrons than most months.

The Gateway Arch released a statement on Thursday, Jan. 31 to encourage visitors to come to the Arch.  The statement thanked the St. Louis community for supporting those impacted by the government shutdown.

According to Smith, the Arch sold out of tram tickets to the top by 2:30pm Saturday.

“We had a few unhappy people,” Smith said. “It’s good for us, though.”

Ticket sales agent Courtney Weiss felt the effects of the shutdown as it stretched on.

At first, Weiss thought a government shutdown allowed her easy time off in the holiday season.  Weiss visited her family during the downtime.

“I was like, ‘Oh cool, I don’t have to worry about getting back immediately,’” Weiss said.  “‘Surely it’s going to be like a week or something, right?’”

Weiss went 35 days without a paycheck as the government remained closed.  She relied on the income of her fiancé and odd jobs during the shutdown, she said.  She added that family members gave her $100 each to cover groceries.

Weiss said some Arch employees picked up second jobs and didn’t come back.According to Weiss, the Arch asked her to work more hours than usual.

“Based on how much they’ve been asking us,” Weiss said, “it seems like a lot of people are no longer able to come back here because they have other jobs now.”

The temporary government reopening only lasts three weeks.  If federal legislators do not come to an agreement by then, the Gateway Arch and other national parks will close again, Weiss said.

Weiss expressed her concern for her long-term finances.

“I honestly already am looking at a second job,” Weiss said.

The effects of the shutdown may reach further than government employees like Weiss and Smith. According to Webster Economics Professor Steve Hinson,, the shutdown hits the St. Louis economy in more places than the Arch.

“There are significant ripple effects,” Hinson said.  “A reduction in spending reduces subsequent spending by federal employees and government contractors, and so forth.”

Hinson added the president’s advisors estimate total spending growth will reduce by .5 percent in the first quarter of the year.  Without the spending from federal employees like Weiss and Smith, Hinson says industries not directly related to the federal government may feel the economic loss.