Webster Votes planned a watch party in Sunnen Lounge the night of the midterm elections. Josh Hawley defeated Democratic incumbent Claire McCaskill minutes before the University Center closed its doors for the night.

Freshman political science major Sarah Hill attended the party because she said it was important for her to be engaged in matters affecting her and the state of her country. Hill said she was disappointed but not surprised by the outcome of the election.

“There were some positive outcomes from the election, and I just tried to focus on those,” Hill said. “This election is an indicator of how much I need to get involved both now and in terms of a career where I can make an impact.”

Michael Langston is the treasurer for the Webster College Democrats. He said he supported Claire McCaskill due to her willingness to work with Republicans.

Langston said Hawley’s win was damaging because now the Senate only has a couple of swing votes each year.

“It hurts,” Langston said. “Not just because of the fact that I liked McCaskill, but if you look at it on a national scale, it shows that Missouri isn’t the swing state it once was. Now, we’re becoming a very solid, ruby-red state.”

Langston also felt Hawley did not reflect the beliefs of his voters. Missouri passed progressive legislation––such as Amendment Two and Proposition B––but voted in a senator who is ideologically inconsistent with said statutes, Langston said.

Cape Girardeau was Trump’s final stop before the midterm elections. He backed Hawley and urged the crowd to vote.

“Josh Hawley will be a tireless champion for the great people of Missouri,” Trump said. “He is great on jobs. He is great on cutting taxes, and there is nobody tougher on crime. He shares your values, and he will always support our military, our vets and our great law enforcement.”

Trump said those who wanted jobs and safety were left with only one choice: to vote Hawley into the Senate.

Applause erupted in the arena when Hawley took the stage. He said Democratic incumbent Claire McCaskill reminded him of Hillary Clinton because the two shared an extensive political background.

The crowd joined Hawley in chanting “just like Hillary.” Their echoed cheers grew louder with each comparison Hawley made.

“Claire McCaskill voted for every far-left environmentalist regulation the Obama administration could dream of,” Hawley said.

Trump agreed, encouraging his supporters to stay away from candidates like McCaskill.

“A vote for Claire McCaskill is a vote for Chuck Schumer, Nancy Pelosi and the legendary Maxine Waters––and more important, it’s a vote for their horrible socialist agenda,” Trump said.

Looking into the future

Regardless of where students’ partisanships stand, Hill said there will always be things that upset people on each side. She advocated for direct involvement as a means for change.

“Students need to talk,” Hill said. “We need to have conversations with each other. If you’re unhappy or you care about how this affects you, then you have to get involved––voting, yes, but sign up to work for a candidate, do phone banking, do canvassing, donate.”

President Trump said he saw the midterm elections as a victory for the country. He said as a whole, citizens have already achieved “the American Dream.”

Langston also interpreted the midterms as a success but not because of McCaskill’s defeat. Since the House of Representatives is now a Democratic majority, Langston said he feels it will hold officials accountable and push back against the Senate. 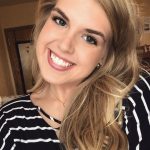