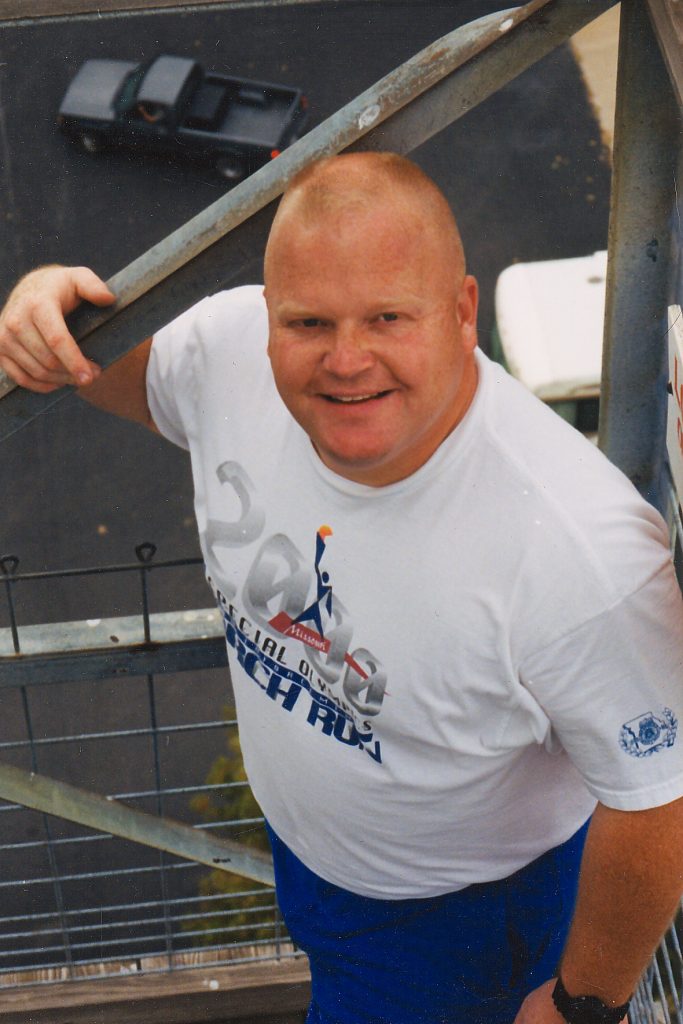 When Cindy Ballman picked up her children from school on Feb. 7, 2008, her 3-year-old daughter Rachel Ballman knew something was not right.

“As soon as we got into the car, Rachel just kept saying ‘We need to call Dad. We need to call Dad,’” Cindy Ballman said. “I was like ‘Honey, he’s at work, and he’s got the meeting tonight. He’ll be home to give you a kiss goodnight, and you’ll see him in the morning.’”

Thornton routinely disrupted meetings, and Tom Ballman routinely escorted Thornton out of them. Prior to the tragedy, Cindy Ballman said there was no sign of animosity between the two men.

“I met Cookie,” Cindy Ballman said. “He seemed like a nice guy. He was always happy, or he seemed always happy. Tom said ‘Cookie’s not a threat. He’s a nuisance.’ He would come in, make a little fuss, and then Tom would usually have to escort him out of the chambers. As soon as the door shut, Cookie would say ‘Okay, Tommy. Take me away.’”

Cindy Ballman said Thornton was ‘just a guy from Kirkwood’ that was falling on hard times and snapped.

“If Cookie had survived, I think he would be devastated knowing that’s what he did,” Cindy Ballman said. “If he had come to his senses that that’s what he had just done, I really think it would be different.”

A Tragic Night
Cindy Ballman never expected a mass shooting to occur in Kirkwood. For her, it had been a normal Thursday. She had a rough day at work, picked her kids up from school and had just finished eating dinner when she found out something had gone wrong in Kirkwood.

A police officer drove Cindy Ballman to the scene. She called her friend to watch her young children.

“[My son said] ‘Mom, it’s okay. Daddy’s not dead, he just needs a doctor,’” Cindy Ballman said. “I said ‘I know honey, I know,’ and the officer apparently gave my friend a look and shook his head no.”

When Cindy Ballman got to the police station, former Police Chief Jack Plummer informed her of Tom Ballman’s death. She was shocked to hear there were victims besides her husband.

“I had to sit there for a minute and take it all in,” Cindy Ballman said. “Every time there’s a mass shooting I go right back to that day and think, ‘How do these people go forward?’ It’s hard enough for us, but we lost a police officer. It was something we knew he signed up for, and we knew this could happen. You don’t expect that going to a city council meeting as a normal citizen. It’s just not what they signed up for.”

The next day, she told her children.

Tom’s Funeral
During the night of the shooting, Reverend Dr. Steven Ranney comforted Cindy Ballman at the scene. Out of the 200 funeral services he has conducted, Ranney said Tom Ballman’s was the largest he has ever done. He estimated 1500 to 1600 people attended the funeral. 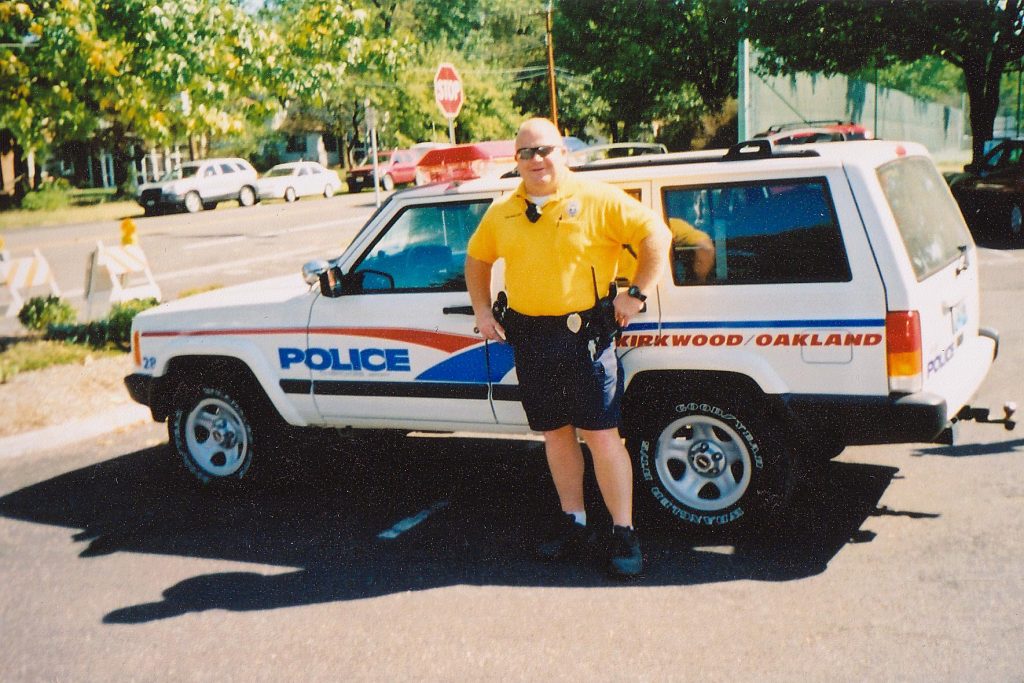 “Our church sanctuary seated about 600, and we counted 660 people in the sanctuary,” Ranney said. “Then, we had a large foyer outside filled with chairs down the hall. We filled up the gymnasium and put the sound in there. There was a room off of that, and we ran out of chairs, so a lot of police officers just stood in that area.”

Plummer gave a eulogy during the service. He connected with Tom Ballman because they had a similar sense of humor.

“I started to talk, and the minute I opened my mouth my [clip-on] tie fell off,” Plummer said. “The top half fell down, so I looked up at the sky, and I said ‘Thank you, Tom.’ Then, I turned to the audience and said ‘You know, Tom and I hated these damn ties. I think this is Tom’s way of telling me I don’t have to wear a tie.’”

Ranney described the way Tom Ballman lived his life as Christ-like, comparing him to Jesus spending his last night with the disciples before facing the “horror of the cross.”

“Jesus said ‘Greater love has no one than this, that a man lay down his life for his friend,’ and that’s what Tom did every day when he went to work,” Ranney said. “Each day as he got up, put on that uniform and went to work, he was laying down his life for each of us. He was saying ‘Today I choose to stand between the people of this community and those who would do them harm.’”

Finding Healing
In the following weeks, Cindy Ballman tried unsuccessfully to find healing at St. Mark Presbyterian Church. Though the congregation meant well, she said it hurt more to attend church than it did to stop going.

“Every time we would walk in, it was always ‘How are you doing?’ and I’m like ‘You guys need to start talking to me like you used to talk to me. I’m not a fragile flower that’s going to just fall apart,’” Cindy Ballman said. “I needed to get some normalcy back into my life, and as much as they had those good intentions, they weren’t helping me heal.”

Cindy Ballman still talks about God with her children, but does not feel she has to attend church for God to know she believes.

After Cindy Ballman left St. Mark, she still kept in close contact with Ranney, who was also struggling to cope.

“I didn’t have any easy answers for this,” Ranney said. “I have a whole long list of questions I’m going to ask God when I get to heaven, and why this happened will go on that list. There are things in this life we may or may not understand, but God’s the one that wins in the end, and in the end, we will know.”

Cindy Ballman said the start of new school years were particularly hard on her children.

“Your teachers want to get to know you, especially when you’re in elementary school and middle school,” Cindy Ballman said. “They’re like ‘Tell me about your family. Tell me about your mom, tell me about your dad.’ My kids are like ‘Okay, here we go.’ For my daughter, it was a little easier. For my son, not so much. He was like ‘What do they want me to say?’ and I said ‘I don’t know. Tell them your dad was a police officer.’”

Cindy Ballman regained a sense of normalcy through her co-workers, friends and partner. A St. Louis County police officer, David Sandbach has been Cindy Ballman’s partner for six years.

While they are not legally married, Sandbach has taken on the role of both husband and father to the Ballman family.

“I am remarried, I’ll say in air quotes,” Cindy Ballman. “We had a commitment ceremony. So, in the eyes of our children and God and our family, we’re married. When we met, I wasn’t ready to take that step of legal marriage, but we wanted our kids to see that we made a commitment to one another. For the good of the family, the [kids] are like ‘He’s Dad.’ Things have changed, obviously. All of our kids are getting bigger and growing up, and life moves forward.”

The Perfect Family
Though Cindy Ballman has moved forward with Sandbach, she will always remember the impact Tom Ballman had on her life.

Cindy and Tom Ballman met in 1996 at a party Cindy hosted. One of Cindy Ballman’s friends brought Tom Ballman to the party with intentions of setting the two up.

“The next day, my friend called and asked me what I thought of him,” Cindy Ballman said. “I said ‘I thought he was all that and a bag of chips.’ She laughed and said ‘Good, because I felt like I was on a date with you the whole night.’”

After the party, they instantly hit it off.

“I called him, and I think we spent an hour on the phone talking,” Cindy Ballman said. “We just so happened to be watching ‘When Harry Met Sally.’ He was watching it at his house, and I was watching it at my house. We both turned off the volume and were quoting the movie back and forth.” 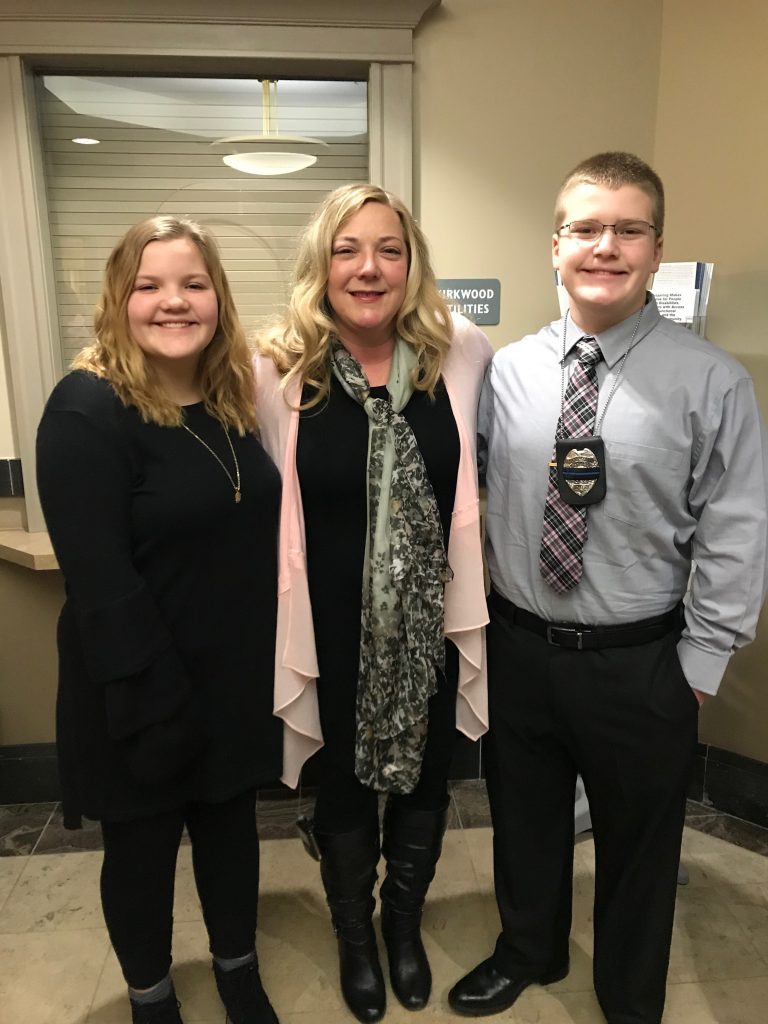 Cindy and Tom Ballman were married for eight years before Tom’s death. They had their son Josh in 2002, and then welcomed their daughter Rachel two years later.

“Everybody always said ‘Aw, you have the perfect family,” Cindy Ballman said.

Cindy Ballman said Tom was a good dad to her young children. She said it was painful to imagine how he would have been involved in Josh and Rachel’s lives as they grew into young adults.

“Those are the parts that suck,” Cindy Ballman said. “That’s one of the things that’s never fully going to go away—seeing how he would be now, when I know that he would be super involved with whatever my kids wanted to do.”

Josh Ballman remembers his dad more clearly than Rachel Ballman, but as time went on, it became more difficult for them both to recall detailed memories.

“[Rachel] still misses him, but she doesn’t have the memories like Josh did,” Cindy Ballman said. “Even his memories are fading. They’re from pictures more than anything.”

Who was Tom Ballman?
Tom Ballman joined the Marine Corps in 1991 and was honorably discharged in 1995. Cindy Ballman said he was always proud of his Marine status.

Then, Tom Ballman joined the Kirkwood police in 1999. He attended the Eastern Missouri Law Enforcement Training Academy, where he was awarded Best All-Around Officer and Most Popular Cadet.

He loved to sing and golf, and he had a “wicked mind” when it came to trivia. Tom Ballman could always crack a joke and enjoyed woodworking.

“If you go into the Kirkwood police station, there is a case right inside the front doors that now has Tom’s hat, Bill Biggs’ hat and Bill McEntee’s hat in there with their badges,” Cindy Ballman said. “Tom made that with another officer in my basement for McEntee. So, now it houses all three of them.”

Tom Ballman also mentored teens in the Police Explorers program and was involved in various organizations in the community. Cindy Ballman said he enjoyed working with the community, and “Kirkwood enjoyed having him, too.”

“This day should not have come for at least fifty more years,” Ranney said in his homily at Tom Ballman’s funeral. “Tom should still be with us. He had so much more to do. There was the playset to erect in the backyard, the entertainment center to finish, the Trivia Night to MC, the Sr. High Sunday School class to teach, Josh and Rachel to raise, Cindy to love, friends and co-workers to listen to and help, Explorers to guide, I could go on and on about all of the things that will go undone.”

Ranney and Cindy Ballman agreed Tom was compassionate and willing to help anyone in need.

“Each day when we get up and put on whatever ‘uniform’ we wear, we can make the choice that Tom made—to love,” Ranney said. “As we choose to love as Tom loved, as Christ loved, then the memory of Tom will not only live in us, but it will spread to countless people who do not even [know] him.”