On one end of town, one memorial was held on the front steps of Kirkwood City Hall, where 10 years ago six lives were lost. On the other end, a second memorial was taking place at the same time at the church where the gunman’s funeral was held.

City Hall honored the lives lost. Family, friends and citizens of Kirkwood came together until they could no longer feel their fingers and toes. Of the roughly 200 people present, no more than 10 were from the black community. Within the walls of Kirkwood United Methodist Church, members of the community discussed a racial divide, still present in the city 10 years after the fact.

The survivors as well as present Kirkwood city leaders do not believe race played a part in Thornton’s actions that night. Current Mayor Timothy Griffin said this situation instead brought Kirkwood closer together in order to heal the community’s wounds.

“I think there are people out there that think that what was going on with Cookie was racially motivated,” Griffin said. “This was the perfect opportunity to discuss community and race, but from the city standpoint, it was not racially motivated.”

Thornton was known as a “fixture in the community.” Current councilman Paul Ward said he had an infectious smile and was a fun-loving guy, which earned him the nickname “Cookie.”

He said that is what makes this situation complicated and confusing.

“I never saw him violent,” Ward said. “I actually never saw him out of control. One of the things that was interesting after it happened, after you’ve had time to sit and ponder, that Cookie was always euphoric whenever you saw him. He was always jovile and so now, you wonder he can’t always be like that.”

Ward said something that is lost in communication is Thornton had a relationship with every person in the city council chambers on the day of the shooting.

Ward helped Thornton with his business. City Attorney John Hessel knew him for 20 years prior to the shooting. Sergeant Paul Faulstich, who eventually killed Thornton, went to high school with him. Griffin referred to him as a “friend.”

“I knew Cookie, he was a friend of mine,” Griffin said. “I was at his wedding reception. He did construction work for my parents. I knew him a long time.”

Ward added even the police officers knew him, including the two officers killed, Tom Ballman and William “Bill” Biggs. He said Thornton never fought with the police, even when he was demonstrating in the council chambers or outside city hall.

“As sorry as I feel and hurt for those who he killed, I feel sorry and hurt for him because I know he had a mental problem,” Ward said. “You can’t do something like that to people and be normal.”

Prior to the shooting, the council contemplated ways to prevent Thornton’s disruptions within the council chambers. One of the options considered was involuntarily civilly committing Thornton to a mental health facility for his “erratic behavior,” according to a wrongful death lawsuit filed for councilwoman Connie Karr. The council did not elect to have Thornton committed.

Following the shooting, Ward said he encouraged local mental health professionals to survey people who knew or met Thornton. He said he wanted to see if they could indicate if something had in fact been wrong and was missed. He said no one took him up on the idea.

Griffin asked Ward to participate in the 10th anniversary memorial on Feb. 7, 2018. He said he knew he had to mention mental health and advocating for better investment in these services. He added violence has become too common in society and is perpetuated by people in distress. 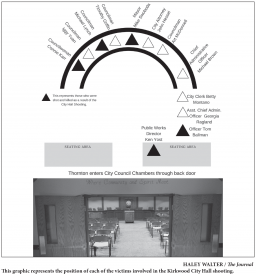 “It is too easy to say he was angry and vengeful,” Ward said. “It had to be more than that. You can’t, as a person who was not violent in any other part of his life, walk up to people and put a gun to their head and shoot them.”

Griffin thought the issue facing Thornton was simple – the city was trying to get Thornton to comply with Kirkwood city codes. Hessel said the code violations were about parking trucks on residential property and dumping debris on vacant lots.

“He failed to realize that Meacham Park was changing and people were taking pride in their community,” Hessel said. “He needed to comply with the rules.”

Hessel said on numerous occasions the city offered to forgive 100 percent of the fines with the promise he would comply with the code. Thornton insisted he was not guilty.

Ward said Thornton consistently came to city council meetings to complain over an eight year period. He said he accused Yost of being a liar and deserved to be fired, that he was being discriminated against, yell donkey noises at the council and claimed Kirkwood engaged in a “plantation type mentality.”

“He would come in and scream,” Hessel said. “He would mock the city council and say ‘I come up here and talk to you and it’s like talking to a bunch of monkeys. Hear no evil, see no evil, speak no evil.’”

Hessel said he felt the final blow to Thornton was the dismissal of his federal case against the City of Kirkwood for allegedly threatening his First Amendment rights. A federal judge dismissed the case on Jan. 28, 2008, saying Thornton would have to pay all costs for the case, according to the lawsuit.

Hessel said he was told Thornton was devastated by the loss because he believed he was going to get money from the lawsuit to help aid his growing financial problems.

A community comes together

Griffin said he thought people were trying to make this a Meacham Park versus Kirkwood situation after the shooting. He said this idea of a “faction of people” created a stigma of a divide.

Griffin did not view the situation in this way.

“The entire community, whether it was the Meacham Park neighborhood or the Greenbriar neighborhood, people saw this as a community situation that we all had to work together to get through and it worked,” Griffin said.

Griffin said after the shooting, there was a lot of discussion, meetings and open dialogue between the residents of Kirkwood and Meacham Park. He said this really helped move the city forward. Hessel said the Department of Justice (DOJ) assisted in this process.

Griffin believes the city of Kirkwood is different, but in a positive way and continues to change. He said if anything good came of this situation it was that the spirit of the city expanded greatly.

Hessel, who agreed the city has moved in a positive direction, said the key to positive awareness is the ability to communicate and truly listen to one another.