In the middle of Kaldi’s Coffee Shop, former Kirkwood mayor Arthur McDonnell speaks up over the laughter from the next table. He explains where he hid while his friends were murdered beside him, just over 400 feet from where he sat 10 years ago.

Police took McDonnell and the other survivors to the police station immediately following the attack. McDonnell snuck a quick call to his wife before having to cut off all contact for the night. The police interviewed each of the survivors in turns and pieced together what happened that night from the different accounts.

McDonnell and his fellow council members had to pick up the pieces and revive Kirkwood into a functioning government once again.

“It’s good for us to move past that and not to keep bringing it up as a reason to be proud of Kirkwood,” McDonnell said.

Before continuing, McDonnell pauses to greet friends passing by. He smiles and chats like he is on a friendly lunch date. Onlookers would not suspect he was in the middle of remembering one of the most traumatic days of his life.

McDonnell went back into the council chamber the morning after the shooting. He and Timothy Griffin, deputy mayor at the time and now current mayor, decided the whole room needed to be gutted. This was the beginning of mending the Kirkwood community.

Barbara McDonnell is the wife of the former mayor. She stayed by Art McDonnell’s side as he tried to help navigate Kirkwood through the aftermath of the tragedy. 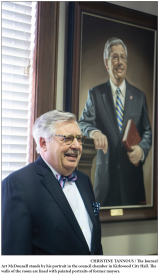 “Arthur sought to build bridges between and among different sectors of the community,” Barbara McDonnell said.

“[It’s] our obligation to go to their churches and sit in their pews,” Art McDonnell said.

Art McDonnell went to a number of the services in the Meacham neighborhood, becoming friends with the ministers. He sat in the back, but they would call him up to join the front row. Art McDonnell even surprised the congregation with his biblical knowledge.

Art McDonnell continues to talk as he walks into Kirkwood City Hall. He has no problem greeting everyone with a jolly smile and firm handshake. The employees still address him as “mayor” despite being two years removed from office.

His traumatic transition into office was accompanied by criticism from supporters of Connie Karr, the councilwoman who ran against him. Her supporters petitioned against Art McDonnell in the wake of her death.

“People were standing up and yelling that I should quit and I just said ‘I’m not going to quit,’” Art McDonnell said.

Nancy Luetzow is a now-Kirkwood council member who had Art McDonnell knocking at her door. Luetzow’s opposition was not with McDonnell, but rather the election process. After Karr’s death, McDonnell was left unopposed except for a write-in nomination.

“I was pushing for delaying [the election] and allowing for possibly searching for someone else to step up, at least put their name on the ballot,” Luetzow said.

Luetzow volunteered on various committees after getting her start through lowering the speed limit by her house with the help of Art McDonnell. After Art McDonnell became mayor, he recommended Luetzow for a position on the Planning and Zoning Commission.

Art McDonnell believes the opposition was not the only reason for lowered attendance at city hall meetings. After the shooting, the citizens of Kirkwood were hesitant to return. Art McDonnell says city council meeting attendance was scarce even with the new policy changes. As mayor, Art McDonnell had to figure out a way to bring the community back together. His mission was to help the people overcome the fear set in place on Feb. 7, 2008.

He walks down the Memorial Walkway outside City Hall and points out each of the plaques in the ground. The cold air accompanies the somber mood. Art McDonnell reveals his connection with each of the people killed while pausing to look at each memorial. The passing train shatters the reverent silence.