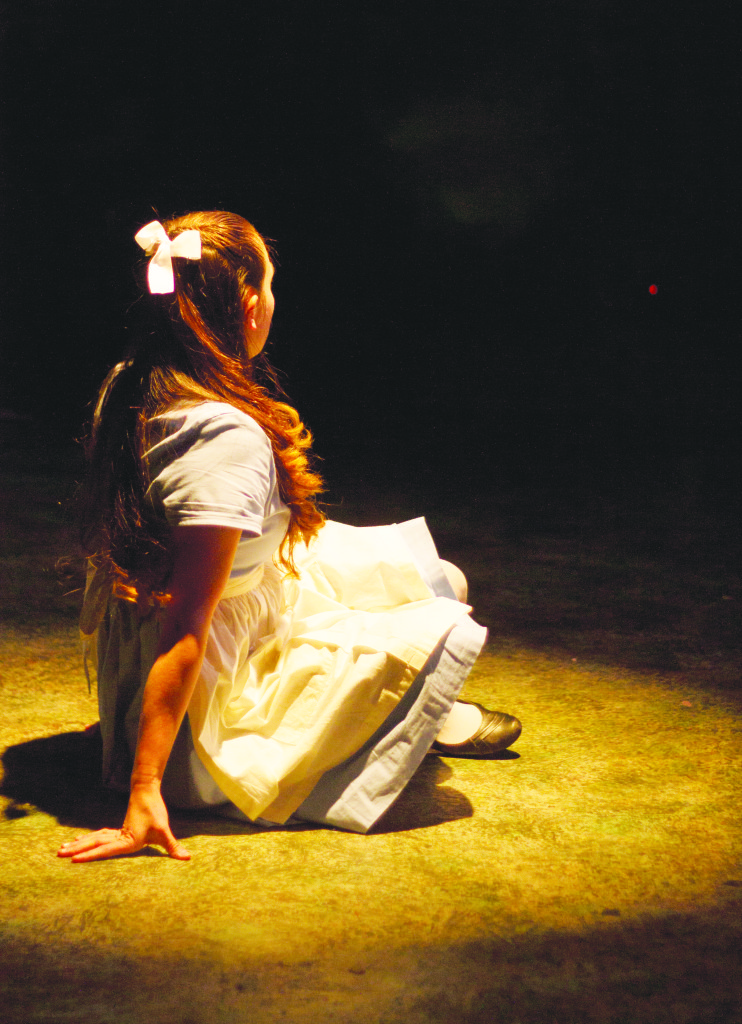 Q: How did you prepare yourself to become Alice?

A: Before the show, I’ll get there a little early and warm up my voice and stretch a little, so that way I’m not just a cold fish walking into a show. But other than that, I try to be as positive as possible. So, in the dressing room I try to talk to as many people as possible or jump up and down a lot. I like doing things that make me excited or curious or kind of on my toes.

Q: From which Alice did you get your inspiration?

A: When I got the part, I went back and watched the Disney movie on Netflix. But mostly I read the book over the summer before auditions happened, and whenever I got casted I just went back to the book, and the script is based entirely on the book by Lewis Carroll — mostly learning about what actually happened and why he wrote it. Because he wrote it for a little girl, so clearly that little girl is the main character. So learning as much as I can about their relationship, so I can understand why he would write a story about a mouse who happens to be her professor or why she is drowning in a pool of her tears, that helped me more than any sort of movie version or adaptation, just getting back to the straight text of it was a lot easier.

Q: Do you relate to Alice at all?

A: Oh totally. It’s actually kind of funny. I can be a little bossy, and she’s definitely bossy. I’m still that curious little kid that runs around like, ‘yeah, let’s go on adventures.’ I do stupid stuff like that all the time. I believe whole-heartedly that the second you grow up is the second you start dying.

Q: How was speaking in a British accent? Was that hard?

A: Not really, actually. We are doing RP (received pronunciation), which is British standard speech in dialects class while we are doing the show. So I was doing it four hours every night, and then doing it in class four times a week. And it wasn’t that hard, for some reason I can hear dialects, and so I was like ‘okay cool, I can do it, and it just kind of worked.’

Sometimes I’ll slip into it conversationally, and it’s becoming a problem. We were in rehearsals six days a week for four hours every night, and I was in every scene, and we’re doing it (speaking it a British accent) every scene, multiple times, so I’m constantly talking in that dialect.